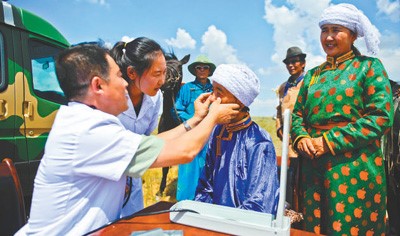 Chinese people’s lives have been notably improved over the past five years owing to China’s significant achievements in economic development, poverty alleviation and strict governing of the the Communist Party of China (CPC), according to a recent online survey.

A total of 81.7 percent of the respondents say their lives are much better compared with five years ago, according to the survey launched by People’s Daily, People’s Daily Online and the Department of Political Science under Chinese Academy of Governance.

Of the nearly 10,000 valid questionnaires collected online, 84.3 percent of the polled saw rapid development of Chinese economy, while 84.8 percent believed that the environment has been significantly improved compared with five years ago.

In addition, 85.9 percent of the respondents said poverty been greatly alleviated over the past five years.

The country’s achievements in comprehensively strengthening Party discipline are recognized by 93.7 percent of the people surveyed.

Nearly 70 percent of the respondents say “formalism, bureaucratism, hedonism and extravagance” have been effectively reined, and political environment has been increasingly purified, as Party tightens discipline on government officials.

The survey attracted 120,000 page views in seven days after it was published on September 21. The respondents for valid questionnaires ranged from 12 to 97 years old, 37.8 years old on average.