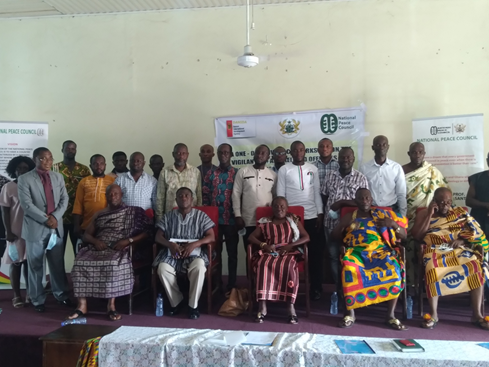 Nana Opoku Asiedu, Chief of Offinso-Kokote in the Ashanti Region is advocating a more transparent electoral process as part of efforts to end political vigilantism in the country.

He said suspicions in the electoral processes was a key factor that is fuelling vigilantism and that upholding transparency as the cardinal principle by all stakeholders is the way to go.

Speaking at a day’s advocacy workshop on peace organised by the Ashanti Regional Peace Council at Offinso, Nana Asiedu said transparency must be the watchword ahead of the December 7 general elections.

The workshop was to expose participants to the Vigilantism and Related Offences Act as well as the roadmap and code of conduct for the eradication of political vigilantism in Ghana.

The Kokotehene said it was important for Ghanaians, especially the leadership of political parties to accept to play by the electoral rules and desist from acts that could trigger violence before, during and after the election.

He said Ghana had come a long way as one of the few stable countries in the West African Sub-Region and underlined the need to sustain the gains collectively as a nation.

He advised the Peace Council to take its peace campaigns to the communities where most of the perpetrators of electoral violence resided to achieve the desired results.

“Kindly take the education on vigilantism to the communities to make the needed impact because most of us gathered here are less likely to engage in political vigilantism”, he urged the Council.

Mr. Solomon Kesse, the Municipal Chief Executive (MCE), said the workshop was timely as the country prepared for another crucial election and urged the participants to take the message to their respective organisations.

He said there could not be any meaningful development without peace and called on all Ghanaians to join hands in the fight against vigilantism to make Ghana great and strong.

He said the President had shown enough commitment to the fight against political vigilantism by ensuring the passage of the Vigilantism and Related Offences Act and urged all stakeholders to play their part in eradicating the menace from our electoral processes.

Madam Margaret Boafo-Atiemo, a Member of the Ashanti Regional Peace Council, said despite Ghana’s political stability, vigilantism had always posed a threat to all the seven elections under the fourth republic.

She said dialogue had proven to be an effective tool to resolve conflicts and recommended it to any aggrieved party to find non-violent solutions to problems.

The quest for peace ahead of the election, she noted, was a collective responsibility of all Ghanaians and gave the assurance that the National Peace Council would continue to advocate for peace throughout the country.