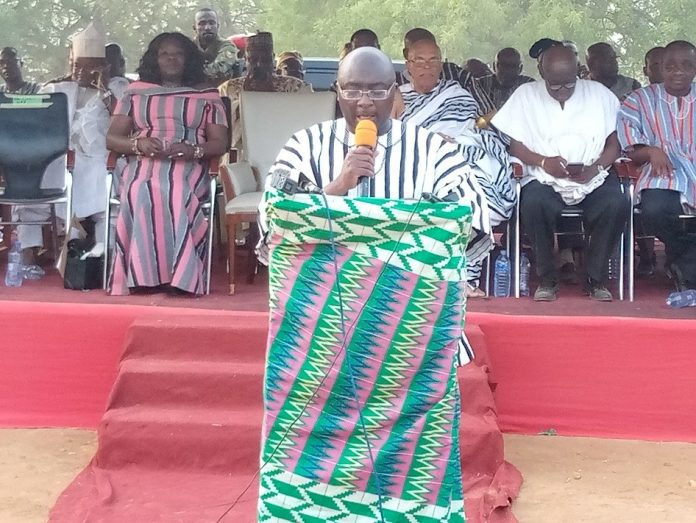 Vice President Dr Mahamudu Bawumia has urged the chiefs and people of Bawku in the Upper East Region to work together in unison to sustain the prevailing peace and tranquility for accelerated socio-economic development.

He asked the key stakeholders of the Town and its environs to push forward for development and progress to create jobs and reduce unemployment and poverty.

The Vice President made the call when he joined the chiefs and people of the Bawku Traditional Area to celebrate the 32nd Samanpiid Festival on the theme: “Harnessing the Economic, Social and Cultural Heritage of our People for the Development of Kusaug”.

The Samanpiid Festival, celebrated annually by the natives of Kusaug, is to give thanks to the ancestors for abundance of rain and good health throughout the farming season.

The period is also used for reconciliation and promotion of peace.

“History, I am told, tells us that a little over four decades ago, there was no town in the north that could surpass Bawku in terms of ingenuity of the people, the types of business and the urban growing nature of the town”.

“However as a result of persistent communal conflict the town nearly became a shadow of itself. Our children’s education was indeed nearly jeopardised as teachers and other workers preferred to work in other places aside Bawku.

It also led to huge expenditure to maintain peace at the expense of developing the area,” he stressed.

The Vice President said the prevailing peace and harmony in the town, which had paved the way for all sectors including education, health and businesses to function properly, would further enable government’s social intervention programmes to succeed and impact lives.

“I want to use this platform to congratulate the people of Bawku, especially the inter-ethnic peace committee, for working tirelessly to bring us this far and I will urge you never to go back to the old days,” he said.

“That notwithstanding I want to appeal to the committee and other relevant stakeholders to continue working together so that in the face of any challenge all necessary measures are taken to bring lasting peace in this area.”

Vice President Bawumia gave the assurance that construction of the Bolgatanga-Bawku-Pulmanko road would be fast-tracked to ensure its completion by the end of 2020.

“After Christmas we will have two teams, in January, one team will start in Bolgatanga towards Zuarungu while the other team takes us forward from here, so by July, by the grace of God, we expect the entire stretch from Bolgatanga to Bawku to be completed totally”.

The completion of the 116 kilometre road and other development projects would boost the social, economic and cultural heritage of the area as well as boost the local economy to create jobs and improve livelihoods.

The Government was working hard to complete the Upper East Regional Hospital in Bolgatanga and $20 million had been secured from the Saudi Government for that effect, he said.

The Festival, which was characterised by cultural dance performances and brought together all the 33 and 25 sub-chiefs and divisional chiefs respectively, was also graced by former President John Dramani Mahama and a delegation from the Ashanti Kingdom, led by Otumfuo Sumankwahene Baffour Asabre Kogyawoasu Ababio III.