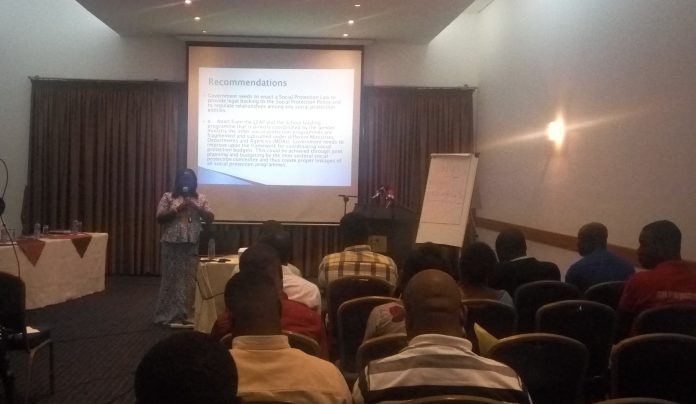 SEND-GHANA’s analysis on the 2018 budget statement has shown that, government setting up a separate Voluntary Education Fund as its alternative source of funding its free senior high school (SHS) flagship programme, is likely not to be sustainable.

The Director of Policy and Advocacy Programme, Clara Osei Boateng of SEND-GHANA in her presentation on the 2018 budget statement in Accra, focusing on education, she said, it’s not easy for one to predict monies that would be generated through that process. Thus, the Voluntary Education Fund could in turn, collapse the whole idea of the implementation of the free SHS.

The Free SHS Programme has been estimated at Gh¢3.6 million yearly, but then, political opponents says it’s not unsustainable financially, whereas Chairman of the Ghana National Education Campaign Coalition, Bright Appiah, also says “the fund can’t solve funding the challenges the policy may come up with. If the government is calling for a voluntary contribution fund, then it raises uncertainty in terms of how the government is harmonising some of these scholarships that existed already and how it can feed into the larger policy scheme.”

According to SEND-GHANA, an urgent resolution of its concerns about the Voluntary Education Fund, will save the country from running into financial difficulties in 2018.

“We all know that ever since the free SHS started, enrollment has shot up and that has exposed infrastructure issues, but in 2018, there will be an increase in enrollment so government has to raise additional funding,” Mrs. Osei Boateng explained.

“The education sector budget increased by 11% from Gh¢ 8.33 billion in 2017 to Gh¢ 9.26 billion in 2018, and however, much of the increment went into the payment of compensation compared to goods and services and capital expenditure,” she indicated.

This according to her, raises concerns how government is going to conform with its commitment in dealing with issues of infrastructure, logistics monitoring and supervision that comes with the sector.

On his part, Mr. George Osei Bimpeh, the Country Director of SEND GHANA, their analysis on the 2018 Budget would be sent to Parliament and Government, for consideration into addressing the concerns of civil society organisations.

Mr. Bimpeh said government had the opportunity to prioritise some projects and programmes in the 2018 Budget, therefore, government must take a second look at the allocations in order to draw some resource from the new ministries and rather direct it to areas that would have better influence on the lives of the ordinary Ghanaian.

He however expressed concerns about the budget cuts to key areas like agriculture, education, health, children and social protection as against astronomical financial allocations to new ministries like the Regional Re-organisation, Business Planning, Senior Minister’s Office and government machinery.

“What issues did government take into consideration before making those allocations to the new ministries? Government should justify the increment to those ministries,” he called.