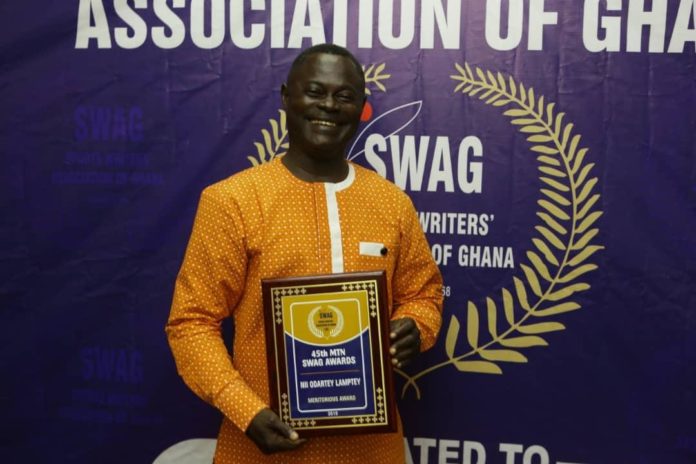 Former Ghanaian international, Nii Odartey Lamptey has received a Meritorious Awards from the Sports Writers Association of Ghana (SWAG) for his enormous contribution to Ghana Football.

Nii Odartey Lamptey who won the SWAG Footballer of the year in 1990/1991 season and led Ghana to win its first-ever World Cup at a tender age of 15, was honoured for his exceptional performance during his playing days and currently a social influence in his life after football.

Mr. Kwabena Yeboah President of SWAG in a citation read for Odartey Lamptey said “You dazzled the premiership playing for Aston Villa after your exploits with Anderlecht. You are on record to be one of the few Ghanaians to feature for all the national teams.

Your life after football is an inspiration to the current generation as the Proprietor for Glow Lamp Soccer Academy, Glow Lamp Farms, and Glow Lamp School. SWAG proudly bestows on you the Meritorious Award for your sterling contribution to Sports in Ghana”.

Nii Odartey Lamptey is known for his erratic career, in which he became a superstar as a teenager and was hailed as the new Pelé.

He retired from football in 2008 and now breeds cattle and sheep on a farm on the outskirts of Accra and manages an academy and the Glow Lamp school.

Nii Odartey is elated by the honour by the Sports Writers Association of Ghana.

The 45th SWAG MTN Awards will be held at the Splash Alisa Hotel on Saturday October 10, with the Chief Justice gracing the event.

SWAG Awards, the longest-running award scheme in Ghana rewards top-performing Sportsmen and women over the year and recognises the efforts of persons involved in Sports development.