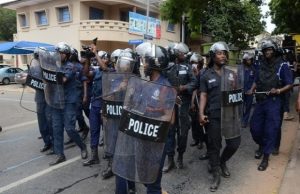 Two police officers were injured Wednesday following clashes between nomadic herdsmen and farmers of Sokode Ando in the Volta Region.

The clashes have persisted since last week, culminating in fierce reprisals from both farmers and the nomads.

The nomads’ random movement of herds of cattle from one geographical location to the other has landed them in trouble with farmers who say the animals destroy their farms.

There have fatal clashes between nomads and farmers in the Ashanti and Eastern regions over alleged destruction of farms by the activities of nomads.

In Wednesday’s incident at Sokode Ando, the police officers were attacked when they sought to intervene in one of the many fights between the herdsmen and farmers.

“When police were going there [the scene of a reported attack] they [farmers] attacked the police, took their rifles away and [vandalised] the police vehicle.

“So another police team had the information and were moving towards their area, but they were also ambushed and they took one rifle away from them and damaged the police vehicle,” he said.

ACP Asuman said some of the seized rifles were retrieved as the SWAT team moved into the area and met with opinion leaders and traditional leaders of Sokode Ando.

The injured police officers were receiving treatment at the hospital, he revealed.

Bilateral trade volume between Ghana and China peaked at US$9.57B