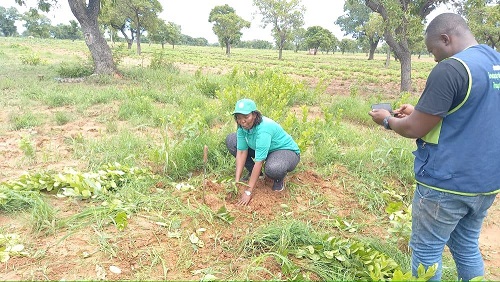 Savannah Women Integrated Development Agency (SWIDA-GH), a non-governmental organisation (NGO), has supported some women in 20 communities across three districts in the Northern Region, to plant 10,000 trees to support the “Green Ghana” initiative.

The exercise was in line with SWIDA-GH’s vision of promoting climate-smart agriculture among women farmers in Northern Ghana, in collaboration with the Ghana Federation of Forest and Farm Producers (GhaFFaP).

Beneficiaries were drawn from the Tamale Metropolis, Sagnarigu and Savelugu Municipalities.

They planted various seedlings including; mango, cashew and shea on their farms, some school premises and homes among other places.

Hajia Alima Sagito-Saeed, Executive Director of SWIDA-GH, who spoke during the exercise at Dognayili, one of the beneficiary communities in the Tamale Metropolis, said the gesture was part of efforts to reduce irregular felling of trees for various purposes such as charcoal burning and fuel wood among residents.

Hajia Sagito-Saeed, who is also the Northern Regional Women Champion for GhaFFaP, said the exercise was also a way of enhancing women’s livelihoods, saying, “these trees they have planted are all economic ones and I believe when they manage and sustain them, they can feed and sell fruits from them”.

“These trees will also facilitate effective and favourable climate conditions that would help boost their agricultural activities for better yields”, she added.

She encouraged beneficiaries to nurture the seedlings and ensure they grew to serve the purpose for which they were planted.

Mr Tahiru Alhassan, Assembly Member for Bamvim Electoral Area in the Tamale Metropolis, expressed gratitude to SWIDA-GH and its partners for aiding the women to undertake the tree planting exercise.

He said trees were vital to the growth of agricultural related activities, and pledged his commitment to ensure the women took good care of the trees for the benefit of their communities.

Some of the women who spoke to the Ghana News Agency said they were happy to have participate in the “Green Ghana” initiative.

They appealed to traditional authorities to support them with farmlands to boost crop production to improve on their livelihoods.

Ningo-Prampram sea defence project to be completed by December