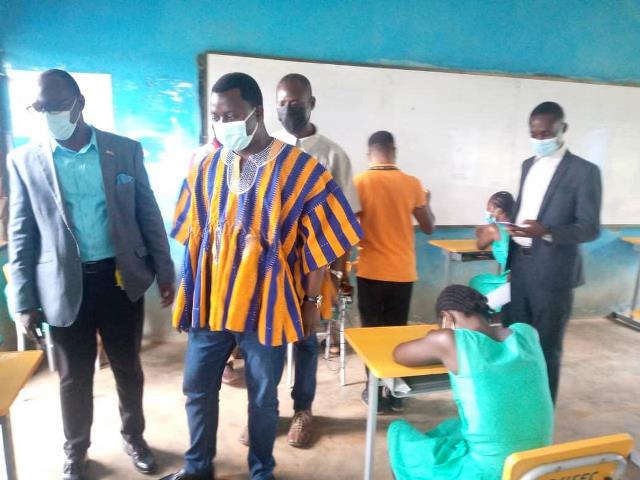 Scores of disgruntled candidates of the West African Secondary Schools Certificate Examination (WASSCE) in parts of the Central Region have called on the government to swiftly arrest and prosecute all persons involved in the leakage of rescheduled WASSCE examination papers arranged by the West African Examination Council (WAEC).

The leaked papers which should have been written on Wednesday, September 15, were Physics and Business Management.

According to them, it was the surest way to discourage or prevent such unscrupulous people from creating doubts about the credibility of WAEC certificates with its enormous financial, physical, psychological, and emotional consequences on stakeholders.

The candidates expressed these concerns on the sidelines of a tour and inspection of some ongoing school projects in some selected Senior Schools (SHS) in the Abura-Asebu-Kwamankese District and Assin South District by Reverend John Ntim Fordjour, the Deputy Minister of Education on Wednesday.

In the interim, WAEC had guaranteed renewed stringent steps to safeguard the integrity of the examination with strict internal controls and compliance by staff to the security regulations of the Council.

The Minister and his entourage visited Aburaman Senior High School (SHS), Nyankomasi SHS, and Nsuta SHS where a total of 1,819 candidates waited in vain to write the papers.

The candidates who were determined and ready to write the examination appeared a pale shadow of themselves and broken-hearted as they stood in groups with uncertainty.

They indicated that candidates usually suffered the most when there were reported cases of examination cancellation or malpractice during an examination, even though in some cases it involved some supervisors and invigilators or any other person associated with the conduct of the examination.

However, WAEC will not hesitate to cancel the entire or some subject results should a candidate be reported to be involved in such an illegal act and appealed school authorities, parents, and candidates to desist from the unethical practice of cheating in the examination as it erodes students self-confidence and affected candidates’ psyche and morale.

“We are disappointed in WAEC for cancelling the papers through no fault of ours. They must do all within their powers to prevent such occurrences because it is very discouraging and disheartening”, they added.

“School authorities and parents should support and encourage their children to study and desist from such nefarious activities. We also plead that all those found capable should be punished to serve as a deterrent to others,” they said.

For his part, Rev. Fordjour expressed the government’s determination to ensure the successful conduct of the ongoing WASSCE and was optimistic about the candidates’ preparedness towards quality WASSCE results to transition them into various tertiary institutions of their choice.

On the school infrastructure, he said the massive ongoing projects which were at various levels of completion showed the government’s commitment to expanding access to education to help meet the Country’s educational needs.

He announced that from 2017 to date, the government had embarked on the construction of 2007 various school projects and completed about 58 percent with others at various levels of completion.
the coronavirus pandemic made it more crucial to prioritise educational demands and expressed the hope that the project would be timeously delivered.