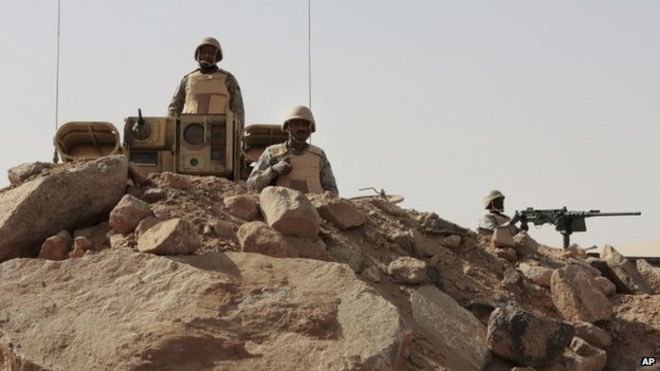 The possible military intervention of Saudi Arabia and Turkey in Syria reflects the desire of both regional powers to secure their interests personally in the war-torn country following the advance of the Syrian army against the foreign-backed rebels, analysts said. Under the banner of fighting Daesh, the widely-used Arabic term for the Islamic State (IS) group, Saudi Arabia and Turkey may launch ground operations in Syria.

After taking part in a security conference in Munich, Turkish Foreign Minister Mevlut Cavusoglu said Saudi Arabia was “ready to send both jets and troops” to Turkey’s Incirlik airbase.

For his part, Saudi Arabia’s Foreign Minister Adel al-Jubeir told the CNN in a recent interview that his country is prepared to contribute ground troops to the fight in Syria, but only as part of a U.S.-led coalition.
Recent developments also suggest that Ankara could take part in the ground assault.

Aside from the declared goal of fighting Daesh, analysts in Syria said the appetite for a ground military intervention was sparked by two reasons; the first is the failure of the first round of the political talks in Geneva between the Syrian government and opposition.

And the second is due to the advance of the Syrian army, which made big victories against the Turkey and Saudi-backed rebels in Aleppo and Latakia provinces near Turkey.

The declared purpose of the wide-scale offensive in Turkey is to sever the supply lines the rebels in Aleppo use to receive aid from Turkey.

Military experts said the Syrian army is moving fast to close the borders after capturing over 90 percent of the northern countryside of Latakia and the rapid progress on the Aleppo front.

For Saudi Arabia, the desire to enter Syria is to prop up rebel groups, which have been receiving aid from Riyadh, a staunch supporter of the insurgency against the rule of President Bashar al-Assad.

“The kingdom has been investing in the Syrian crisis alongside the rebels to serve its ultimate goal, toppling the Assad administration, which constitutes the arm of Iran in the Arab region,” Maher Ihsan, a political analyst told Xinhua.

He added that the Iranian growing influence in the region, mainly in Iraq, Syria and Lebanon was the main drive behind the Saudi backing of the insurgency in Syria.

As for Turkey, Ihsan added, the intervention in Syria will enable it to stop the advance of the Kurdish fighters in northern Syria, near the Turkish borders, and impose its long-demanded safe zone, a kind of a buffer zone, which Turkey wants to create in Syria to deal with the refugee influx and cut off the road in the face of the Kurds who want to connect areas under their control in northern Syria with each other.

On Saturday, the Turkish artillery started pounding the positions of the Kurdish People’s Protection Units (YPG) in several areas in Aleppo.

The shelling came just hours after Turkish Prime Minister Ahmet Davutoglu said on Saturday that Turkey, “if necessary,” will take military actions against the Kurds in Syria.

In a televised speech, Davutloglu said “we would expect our friends and allies to stand by us.”
The Kurds have been Ankara’s worst nightmare, especially after they have made notable gains in northern Syria, something Turkey apparently cannot accept.

Turkish officials have repeatedly said that they will not allow the Kurds in Syria to expand more near the Turkish border, as Ankara fears any separatist Kurdish movement in Syria, would inspire similar moves Turkey, where nearly 22 million Kurds resides.

Muhammed Hilali, a Syrian journalist and political analyst, said that “even though the ground military intervention could not be shunned aside, I think that Turkey and Saudi Arabia have declared such a move to practice pressure on the Syrian government to abide by the cessation of hostilities and stop its campaign against the so-called moderate rebels.”

Saudi Arabia and the exiled opposition repeatedly said that a political transition with Assad giving up power should be the prelude of the political settlement to the Syrian crisis.

In Damascus, Syrian Foreign Minister Walid al-Moallem said recently that the presence of foreign troops on ground without the consent of the Syrian government will be considered as a foreign aggression that requires resistance.

He continued that the foreign troops entering Syria without the approval of the government will be “sent home in wooden coffins.”

Amid the tense situation, the political landscape in Syria has become clouded with fears of extra militarization of the crisis, something that could usher in a continuation of conflict. Enditem