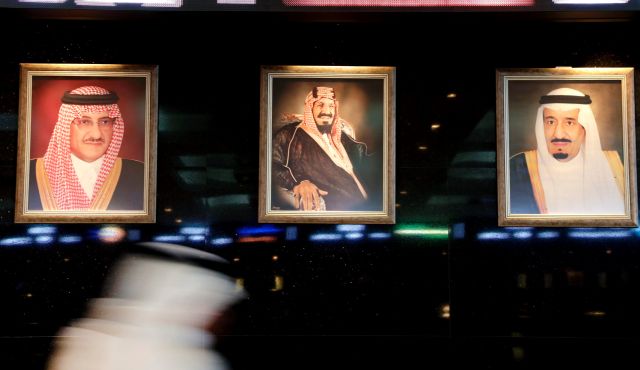 Portraits of the Saudi leaders in the Riyadh stock exchange. Photo by AP

Two beheadings in Saudi Arabia on Monday ? of a Syrian drug trafficker and a Saudi national convicted of murder ? took the number of executions in the kingdom this year to 100, AFP reported.

That number is still far below the 1995 record of 192 executions, as reported by Amnesty International, but is still significantly higher than the 87 executions during the whole of 2014, according to AFP.

Syrian Ismael al-Tawm was beheaded in the northern region of Jawf for smuggling ?a large amount of banned amphetamine pills into the kingdom,? according to an interior ministry statement carried by the official Saudi Press Agency.

A separate statement said that Rami al-Khaldi was executed in the western province of Taef after being convicted of stabbing another Saudi to death.

Drug trafficking, rape, murder, armed robbery and apostasy are all punishable by death under the kingdom?s strict Islamic code of law, though drug and murder convictions account for the bulk of executions.

Amnesty International has criticized Saudi judicial proceedings as ?falling far short? of global norms of fairness and maintains that the use of the death penalty for any crime other than premeditated killing is a violation of international law.