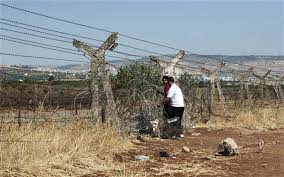 Thousands of Syrian Kurdish civilians were fleeing to the Turkish border on Thursday as Islamic State jihadists advanced on a Kurdish enclave. The militant group seized 21 villages around the town of Kobane in 24 hours, the Britain-based Syrian Observatory for Human Rights said, cutting the enclave off on three sides.

Turkey’s Dogan News Agency showed footage of dozens of people walking near a railway line that runs along the Turkish-Syrian border and gathering under the watchful gaze of Turkish troops.

The report said 3,000 civilians were trying to cross the border.

“The people standing across from us are our cousins, nephews, nieces, aunts running away from the war,” a local man was quoted as saying. “Until now, no one has come here and said let them in, we have been asking for our relatives to be let in [to Turkey].”

Islamic State fighters started a major assault on the Kobane area from both east and west on Tuesday accompanied by heavy shelling, the Observatory said.

Local news site Welati reported a call by authorities in the largest of Syria’s three Kurdish-controlled areas for locals to join the militia, the People’s Protection Units (YPG).

The Islamic State group has made territorial gains in northern and eastern Syria over several months that it is seeking to consolidate.

Observers say that the People’s Protection Units (YPG) are among the most effective forces combatting the extremist group, which they have been fighting since its formation in April last year.

Earlier this week the YPG – which is close to the banned Turkish Kurdistan Workers Party (PKK) – said it had captured 13 villages near the mainly Kurdish city of Qamishli in north-eastern Syria from the group.

Syria’s conflict, which started with peaceful demonstrations in March 2011, has degenerated into a multi-sided civil war between government forces, rebels, the Islamic State and the Kurds.

The last year has seen the military consolidate control of key areas in central Syria, while the Islamic State has seized swathes of territory in the east and north-east, leaving mainstream rebels on the back foot.

IS Attack Drives Hundreds From Yarmouk

International Criminal Court Must Be Allowed To Take Action-UN