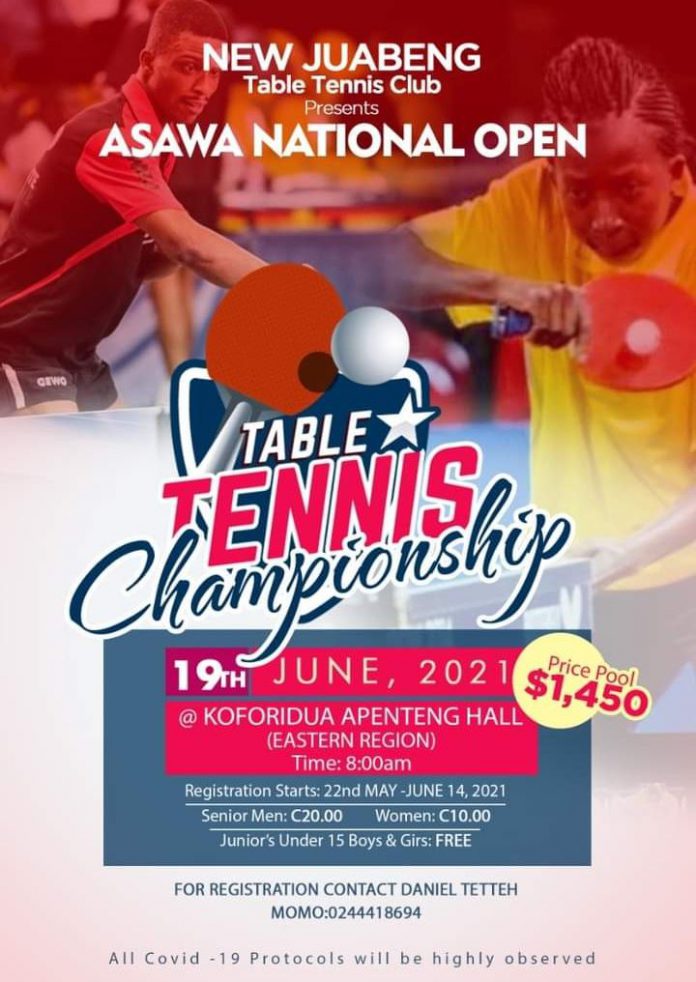 A whooping amount of $1,450 will be up for grabs as prize pool in the upcoming biggest table tennis event dubbed, “Asawa National Open Championship” on Saturday, 19th June, 2021 at the Apenteng hall in Koforidua in the Eastern Region.

The event which will attract over 200 players both in the seniors men, women and juniors respectively is being organized by former National champion and Olympian Isaac Opoku ‘Asawa’ with support from his parent club New Juaben Table Tennis Club, NJTTC.

In an exclusive interview with the Public Relations Officer of the club, Mr. Emmanuel Obiri Mintah, disclosed that the core aim of the event is to unearth talents within players.

“As part of preparations towards the upcoming African Games in 2023, he (Asawa) has decided to organize this event in order to express his love for the game as well as create the platform for players to train and prepare well for the task ahead.

“It will also serve to unearth hidden talents within the junior players who are the future holders of the game and potential medal winners,” he said.

He added that top dignitaries will be in attendance to grace the occasion and motivate the players.

“We will be having high profile personalities on the day in attendance, we will have the MP of New Juaben South, Hon. Micheal Okyere Baafi, the president of the Ghana Table Tennis Federation, Mr. Mawuko Afadzinu, the Regional sports director and including others”, the PRO, Emmanuel Obiri Mintah stated.