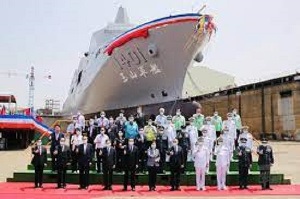 Taiwan President Tsai Ing-wen on Tuesday presided over a launch ceremony for an amphibious transport ship, which is her country’s first indigenous landing platform.

Tsai said at the ceremony in the southern port city of Kaohsiung that the ship, which is the first of a series of new 10,000-ton amphibious transport docks, was designed and built based on the needs of Taiwan’s national defence combat training.

“This is an important milestone for our national shipbuilding programme,” Tsai said, adding that the ship will help to strengthen Taiwan’s defence capability.

According to the Navy, the amphibious transport ship is expected to enter service next year in order to support transport missions and amphibious operations.

The 10,600-ton ship, which is 153 metres long and 23 metres wide, is built by the state-run CSBC Corporation Taiwan and can carry more than 670 soldiers.

CSBC Chairman Cheng Wen-lung said at the ceremony that the 10,600-ton amphibious warfare vessel will be used for the transport of personnel and supplies to Taiwan’s offshore islands and Taiwan-controlled islands in the disputed South China Sea, the state-run Central News Agency reported.

The Navy said that the vessel can be also transformed into a hospital ship during disasters for humanitarian assistance.