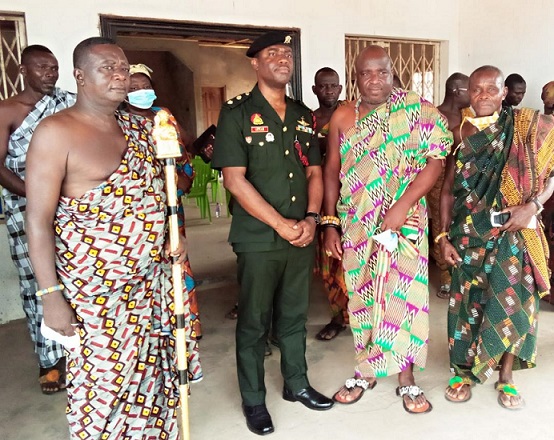 Paramount Chief of Takla Traditional Area, Togbe Ayim Adzokoto II, has called for support towards activities of the Ghana Armed Forces. He says with this it would redefine perceptions that the public has about the GAF.

He, therefore, expressed appreciation towards leaders of the 66 artillery Regiment for properly recognising his authority.

He stressed that good Military public relationship was in the interest of development and co-existence.

He made these remarks during a tour embarked upon by the new Commanding Officer of the 66 Artillery Regiment in Ho to his area, Takla Traditional Area.

Lt. Col. E S Appiah, new Commanding Officer of the Regiment said, his tour was focused on introducing himself to key stakeholders in Volta and Oti regions to ensure good working relationship.

According to Lt. Col. E S Appiah, his doors are always opened for a good relationship with especially the chiefs in making sure peace and unity exist in the two regions.

Togbe Adzokoto in a speech spoke about Takla and stated further that, in the past public opinion about the military was not encouraging and added that this, was due to lack of proper orientation.

The respected Paramount Chief said that it is important for personnel to apply professionalism not only to official acts but unofficial acts as well in building public confidence towards the military.

He, therefore, assured his guests of his paramountcy’s resolve to support the military in their activities.

Lt. Col. E S Appiah was accompanied by Lt. D Asham-Tettey, Intelligence Officer of the 66 Artillery Regiment, WO I Duho J, Administrative and Liason Officer of the same Regiment.