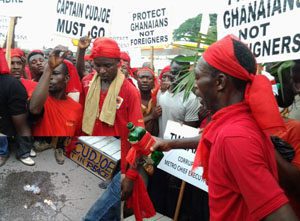 Irate artisans and mechanics who are being ejected from their present location near the Takoradi Jubilee Park in Western Region by the Sekondi-Takoradi Metropolitan Assembly, have called on the gods of the area to deal ruthlessly with the Metropolitan Chief Executive, Capt (rtd) Anthony Cudjoe.

They are being ejected from their current location to pave way for the construction of a shopping mall by a South African.

The artisans, with eggs and bottles of schnapps, poured libation at the entrance of the Western Regional Coordinating Council (RCC) in Sekondi yesterday and called on the gods to deal with the MCE because according to them, Capt. Cudjoe was insensitive to their plight.

They also called on President John Mahama to as a matter of urgency, remove the Sekondi-Takoradi MCE from office because he is incompetent and corrupt.

This was after the artisans had embarked on a three-hour demonstration through the principal streets of Sekondi to let the whole world know that the MCE had destroyed their sources of daily bread, and later presented a petition to the Regional Minister, Ebenezer Teye Addo.

The mechanics, who had resolved not to relocate, had their structures demolished on Friday, February 7, 2014, to pave way for the construction of a shopping mall on the 22-acre land.

According to them, they were in limbo because what they gathered was that the new site at Kansaworodo, where the assembly claimed it had purchased for them to relocate to, had not been properly acquired.

They therefore decided to stage a massive demonstration last week Thursday but were restrained by the police with the reason that there was a regional ministers? conference in the region and that the regional minister was not around to receive their petition.

The artisans agreed and rescheduled the demonstration for yesterday.

Thousands of them therefore gathered around the Jubilee Park clad in red attire and arm bands and embarked on a peaceful procession from there to the RCC.

The protestors carried placards, some of which read, ?We are Ghanaians Not foreigners?, ?Bye-bye Captain Arrogance Cudjoe?, ?Protect Ghanaians, Not foreigners?, ?Capt Cudjoe must go?, ?True Power Belongs to the masses and ?President Mahama Must Act Now?.

It was at this point that one of them stood in front of his colleagues, holding some eggs and a bottle of Schnapps, smashed the eggs on the ground and poured libation to curse the Sekondi-Takoradi MCE for insisting on his decision.

After receiving the petition, the regional minister went through it and assured the demonstrators that he would forward their concerns to the president.

The spokesperson for the demonstrators, Aboagye Boampong, alleged that items worth over GH?50 million belonging to the artisans were destroyed during the demolition exercise.

According to the mechanics, moving to the new site would only kill their business and prevent hundreds of the youth from being employed.

The Tanokrom zonal chairman, Kingsford Eshun, indicated that due to the hilly nature of the site, it would be impossible for the artisans to work effectively from there.

They alleged that the new site experienced flooding when it rained and that the electricity transformer there was too small to cater for their operations, among other things.