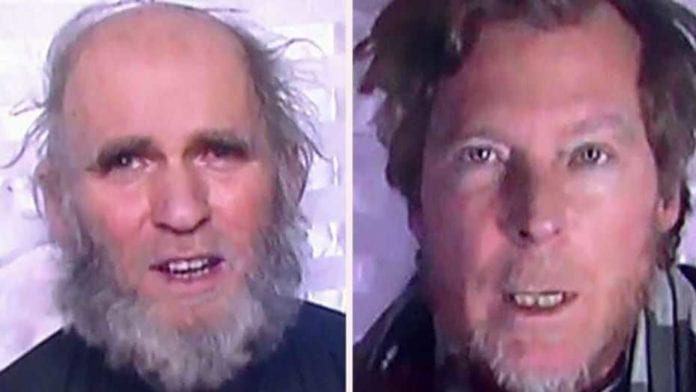 The Taliban on Tuesday freed two Western hostages after three years in captivity, including an American professor, in exchange for three insurgents captured during the long-running war in Afghanistan.

American Kevin C. King, 63, and Australian Timothy J. Weeks, 50, who both taught at American University in Kabul before they were kidnapped in 2016, were released to American special operations forces.

In return, the Afghan government released insurgent Anas Haqqani, the brother of a Taliban leader; Hafiz Abdul Rashid, a senior Taliban commander held since 2014; and Hajji Mali Khan, a senior commander and uncle to a Taliban deputy. They were flown to Qatar, where the Taliban has a political office.

The exchange was made after Afghan President Ashraf Ghani consulted with U.S. Secretary of State Mike Pompeo and national security adviser Robert O’Brien.

The releases were negotiated by U.S. envoy Zalmay Khalilzad, who’s been working with the Taliban for months on a possible peace deal to end 18 years of U.S. military involvement in Afghanistan. Ghani announced the conditional trade last week.

Some Afghan lawmakers criticized the release of three captured Taliban — particularly Haqqani, whose father Jalaluddin Haqqani is the founder of the Haqqani militant network.

“The decision to release Anas Haqqani makes clear one point: That other countries and other people are making decisions in this country, not the government,” Afghan lawmaker Ali Akbar Jamshidi said.