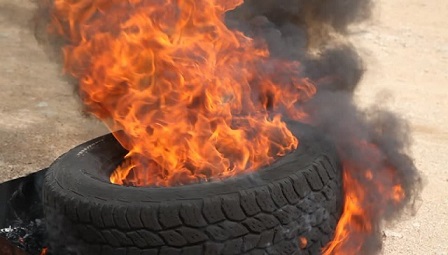 Some supporters of the National Democratic Congress (NDC) on Thursday night massed up on the streets of Tamale and burnt tyres in protest against the results of the 2020 Presidential elections.

Some of the streets where tyres were burnt included main Tamale to Agric Traffic Light, Sagani, and Tishigu Roads, and about several tyres were burnt at few intervals and at main intersections of the township roads.

Amidst the burning of tyres and the protests, joint patrol teams from the Ghana Police Service and the Ghana Armed Forces, on patrol duties, stepped in to restore sanity.

From expert account, civilians were shooting from bazooka guns, but it was not clear who fired them.
The Electoral Commission on Wednesday evening declared President Nana Akufo-Addo President-Elect following Monday’s general election.

However, the leadership of the NDC have rejected the results announced by the Electoral Commission, raising issues with the collation of the results.

Catholics Urged Not To Burn Their Opportunities For Temporal Happiness