Government is to rename the Tamale Sports Stadium after the late Alhaji Aliu Mahama in honour of the former vice President in the Kufuor administration. 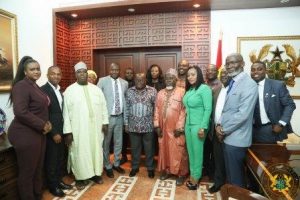 President Nana Addo Dankwa Akufo-Addo who disclosed this when the Aliu Mahama Foundation called on him at the Flagstaff House on Monday, said the move was in fulfilment of a campaign promise he made in the run-up to the December 2016 elections.

The Foundation, led by its Chairperson, Mr Gabby Otchere-Darko, was at the Presidency to apprise the President on the planned activities leading up to commemoration of the fifth anniversary of the passing of the late Vice president.

President Akufo-Addo said the late Alhaji Aliu Mahama was a valuable member of former President Kufuor’s team, who had so much to do with the Tamale Sports Stadium, and that it was appropriate to raise a befitting monument to his memory in testimony of his contribution to sports.

He said Alhaji Mahama’s premature departure was “an emotional matter for us,” and was elated that the Foundation had put up a programme to celebrate the life of the late Vice President.

Mr Otchere-Darko informed the President that the Chief Imam, Sheikh Dr Osman Nuhu Sharabutu would say special prayers at the House of the late Vice President on November 16, 2017, the exact date on which Alhaji Mahama died five years ago.

That event precedes a fundraiser at the Accra International Conference Centre, and the launch of an arts exhibition that would run from November 16 to December 6, 2017, in aid of the building of a Presidential library in memory of the late Vice President.

Then on Saturday, November 25, 2017, the Foundation would organise a clean-up exercise in Tamale, followed by a talk on the need for greater discipline.

Finance Minister Ken Ofori-Atta would on December 6, 2017, deliver a lecture on the topic “Transforming Ghana beyond Aid: How to get there”.

He said his late father was a man of virtue and a nationalist, and requested of the President that the late Vice President’s legacy be preserved for posterity.