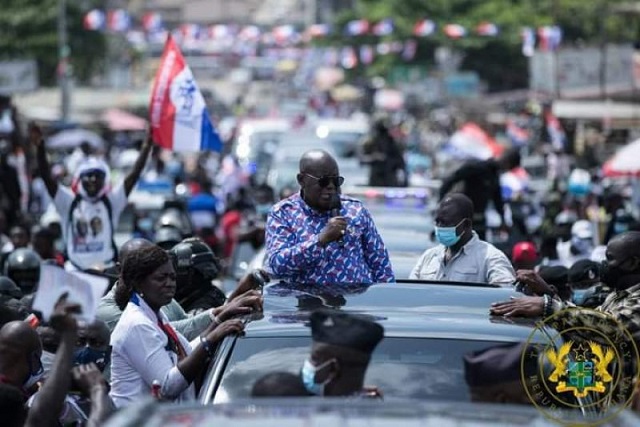 The MP, also the Deputy Minister of Gender, Children and Social Protection, told the Ghana News Agency (GNA) after paying a courtesy call on the President Akufo-Addo and congratulating him on his re-election, saying it was an indication that Ghanaians admired and appreciated his desire, zeal and passion to build a better Ghana.

The outspoken legislator secured 22,359 votes to secure the seat, and thanked constituents for giving her another chance to represent them in parliament for the third time.

“The Tano North Constituency witnessed significant level of development within the past four years and there was no way the NPP was going to lose both the presidential and parliamentary elections. We worked hard to achieve this feat and we will work harder to consolidate the gains in election 2024,” she said.

“Even a child will attest to the fact that there is drastic transformation in areas of particularly road, health, water and education in Tano North Constituency. This is depicts a true portrait of any development-oriented government. We can’t take voters for granted and we will work hard to justify the confidence they have reposed in the NPP government,” she added.

Mrs Prempeh emphasised that Ghanaians would not regret retaining the government in power, saying the next government under President Akufo-Addo’s watch would make life better for particularly, the ordinary citizenry.

“We will strengthen the free SHS programme, NHIS, and also ensure the the One-District-one-Factory project takes their full course. No community would be left out in the sharing of the national cake and Ghanaians would understand us better and see the differences by 2024.

“In fact we can’t afford to let this generation down, and we would leave no stone unturned to tackle national development challenges for Ghanaians to understand we can do what we say. This will make election 2024 easy for us,” the MP stressed.

Describing the NPP’s election victory as victory for all, Mrs Prempeh called on particularly, supporters of the NPP to celebrate in moderation and ensure that their jubilations would not inflame passions, and ignite unnecessary nationwide tensions that could trigger post-election violence and mar the beauty of the nation’s multi-party democracy.