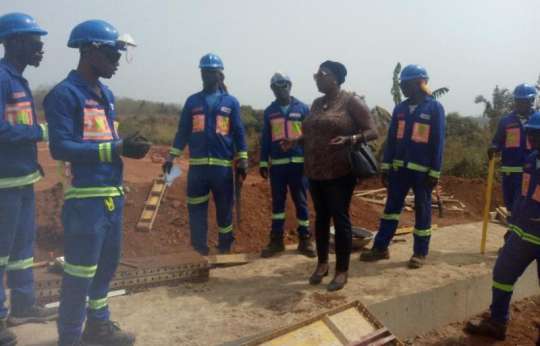 Mrs Freda Prempeh, the Deputy Minister of Gender, Children and Social Protection has inspected on-going construction works on the 12.7 kilometre Techire-Adrobaa road and commended the contractor for the job done so far.

In December last, Mrs Prempeh, who is also the Member of Parliament (MP) for the Tano North constituency in the Ahafo Region performed a ground breaking ceremony at Techire for work to begin on the project.

It is being funded by the government and executed by Alexiboam Company Limited, a Sunyani-based local road construction firm.

Mrs Prempeh said she was impressed with the progress of work and expressed the hope that it would be completed within the 12 vmonths as scheduled.

The successful completion of the project would provide huge relief to residents in communities served by the road, who have over the years appealed to successive governments to fix it.

Though the project’s site manager would not speak to journalists, the Ghana News Agency (GNA) gathered the work was about 60 per cent complete.

Mrs Prempeh who also inspected a culvert constructed on the Adrobaa-Susuaho road underlined government’s determination to facilitate equitable distribution of the national cake to benefit all Ghanaians.

She observed development had nothing to do with people’s political affiliations, but quickly added it behooved on Ghanaian voters to choose political parties that were development oriented like the New Patriotic Party (NPP).

Mrs Prempeh indicated as promised by President Akufo-Addo, most of the deplorable road networks in her constituency and the country in general were expected to witness major construction and reshaping works in 2020.

In the Past four years, the Deputy Minister said infrastructural development undertaken by her and the government in various communities in the Tano North Municipality were unparalleled.

She called for the people to return the government to power in this year’s general election, to bring more development projects to the area.

Mrs Prempeh said the Bomaa-Onye-Nkwantabisa, Adrobaa-Krofrom-Susuaho, Bomaa-Anwenase-Atonso and Duayaw-Nkwanta-Bomaa roads would be put into good shape by the close of the year.

Meanwhile, residents in the area expressed gratitude to the MP and President Akufo-Addo for the Techire-Adrobaa road project, and promised to renew the mandate of the NPP in the general election for the government to achieve its vision for the nation.

They assured they would forever be grateful to the President for paving the way for the construction of the road, which would facilitate the movement of the locals and enhance their farming activities.

In an interview with the GNA, Alhaji Maama Limann Gausu, an opinion leader at Techire, said the people had gained confidence in the NPP because of the road construction.

He said since 1992, the voting trend in Techire and Adrobaa were in favour of the opposition National Democratic Congress until the 2016 general election when the NPP made some inroads.

Alhaji Gausu however predicted a landslide victory for the NPP in the area and the MP in particular for the level of development brought to the local communities.