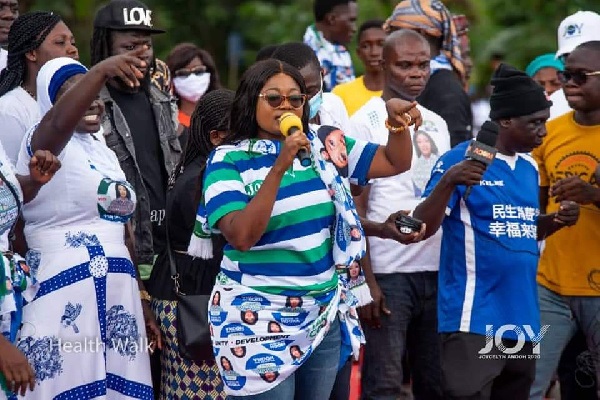 The independent Parliamentary candidate for Tarkwa-Nsuaem constituency, Madam Joy Jocelyn Andoh, at the weekend, led hundreds of her supporters to embark on a health walk to keep fit.

The event, which was organized by Madam Andoh, was to identify herself to the constituents as the independent Parliamentary candidate for the area.

Aided with music, the supporters who were wearing the candidate’s branded T’ shirt began the walk from the Akyempim Township to the Tarkwa main bus terminal through some principal streets of Tarkwa, ended at the New Atuabo John Taylor basic school park.

Addressing the gathering after the walk, Madam Andoh advised the residents to adopt a healthy lifestyle and make physical fitness a top priority.

Madam Andoh, who is seeking the mandate of electorates in the December 7 polls, promised to assist the youth gain employment, provide scholarship for needy but brilliant students, provide loan facilities to traders to expand their business and train the youth in an apprenticeship programme to become useful citizens in their communities.

She appealed to her supporters to avoid politics of insults and instead work hard to wrestle power from the current Member of Parliament.

Nana Amponsah Okobeng, a businessman, called on the residents of Tarkwa-Nsuaem to vote massively for Madam Andoh as she had the welfare of the residents at heart.

He also pledged to assist the residents of Tarkwa-Nsuaem constituency to enable those interested in small scale mining earn money to cater for their families.

Nana Okobeng beseeched Ghanaians not to compromise the peace in the country and remain united before, during and after the election.

Mr Joseph Anoba, a campaign team member for the Independent candidate, added that they would work to ensure Madam Andoh win the Tarkwa-Nsuaem constituency seat.