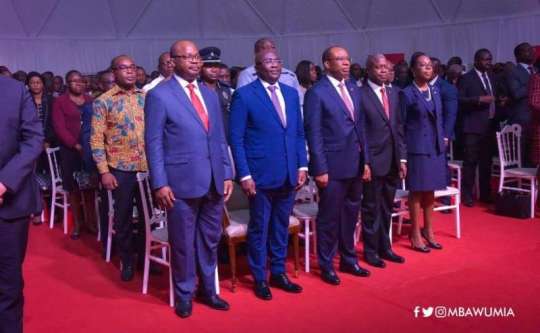 Vice President Dr Mahamudu Bawumia says the introduction of various digital initiatives by government will widen the tax net and increase the number of taxpayers from about two million contributors to 16 million by the end of 2020.

In this vein, government would soon convert all national identity numbers into tax identification numbers to increase the number of people registered by the Ghana Revenue Authority (GRA) to pay taxes in the country.

Dr Bawumia reiterated government’s commitment to leveraging on technology to overcome many of the country’s developmental challenges and formalise the economy, explaining that, the national identification cards would help in verifying income sources of individuals and capture them into the tax net.

For instance, he said, the ID cards would help in establishing the identity of citizens while the digital addressing system would establish the identity of properties, which would create a rich and credible database, not only for effective public administration but also benefit the private sector.

Vice President Bawumia said in a keynote address in Accra on Monday when he officially unveiled Absa Ghana Limited, marking a transition from Barclays Ghana Limited after over 100 years of operation in Ghana.

The database, he said, would be available to banks, rating agencies, revenue authorities, among others, which would facilitate revenue mobilisation drive and inform decision-making by both public and private institutions.

The event brought together key stakeholders in the banking and financial sector, including the Governor of the Bank of Ghana, Dr Ernest Addison and his two deputies and captains of industry as well as customers and clients of Absa Ghana Limited.

“I urge Absa to continue to play a major role in Ghana’s development agenda solely anchored on Ghanaian economy for over 100 years. We will continue to partner and collaborate with you, and urge the Business Community to also do same. So together, we can create a prosperous nation,” he assured.

Dr Bawumia announced that the Bank of Ghana will next month launch the Universal QR Code, which would make it possible for all retailers to receive payments on their mobile phones without having the point-of-sale device and make Ghana the first African nation to have the payment system.

For his part, Mr Daniel Mminele, the Chief Executive Officer of Absa Group Limited, described the unveiling of Absa in Ghana as a great milestone, which marks the first of its regional operation in Africa.

He pledged the Bank’s commitment towards supporting the transformation and economic growth of Ghana and Africa in general.

The Bank will continue its strategic initiatives to unlocking the economic potential of the nation in areas of agriculture, energy and agribusiness, as well as small and medium scale enterprises, to better the lots of the people, Mr Mminele assured.