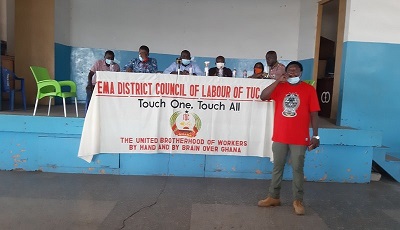 The Tema District Council of Labour (TDCL) has formed a five-member committee to draw a roadmap for engaging government and stakeholders to revamp of Tema Oil Refinery (TOR).

The committee was formed at a general meeting of the Council after discussions were held on the happenings at TOR and its effect on workers and the Ghanaian economy.

Mr Dotse Kojo Gadabor, Chairman of the TDCL, said the Council had taken note of the disturbing developments in some companies within its jurisdiction, especially TOR which he said was a national asset that must not be allowed to sink.

Mr Gadabor said the Committee had been tasked to draw a road up in the shortest possible time to enable the Council to take up the necessary acceptable actions to drum home their demands for the recapitalization of TOR.

He called on the office of the President and other relevant institutions which had a role to play in addressing the TOR challenges should do so in earnest.

The Council added that “we also wish to state that, failure or undue delay in resolving this matter, the leadership of the Council will be compelled to do the needful in calling for all workers in the region to solidarize with our members at TOR”.

Mr Bright Adongo, TOR Chairman of the Professional and Managerial Staff Union (PMSU) of Union of Industry, Commerce and Finance Workers (UNICOF), briefing the meeting on the refinery’s issues, said they petitioned the Presidency to dissolve its Board of Directors for being inefficient.

Mr Adonko said the Board had delivered negative value to the Refinery, stating that they rejected proposals from staff to partner it to find a lasting solution to the problems of TOR stressing that “we have a Management and Board capacity problem”.

Listing some of the issues, he said for the first time the Board and Management could not assure workers of future prospect of revenue inflows adding that they had also failed to secure partnership from several investors who had expressed interest in expanding the refinery capacity between 100,000 to 150,000 BPSD.

He added that no new project or initiative had been undertaken since the Board came into office, noting that “the BOD, as eminent as they are, have not been able to exert its influence on NPA, in other to collect already received money paid by all Ghanaians to be used for recapitalizing aspects of TOR).

He further said they had been unable to secure crude oil for the refinery to work leading to the idling of the plant which engenders high maintenance cost.