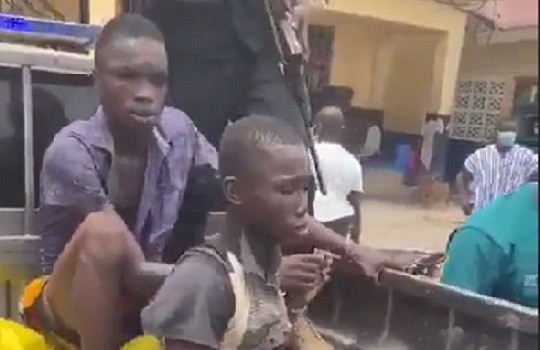 Two teenagers, accused of murdering a 10-year-old boy at Coca-Cola, near Lamptey Mills in Kasoa, have been remanded into Police custody by the Ofaakor District Court.

Felix Nyarko, aka, Yaw Anane, a 16-year-old labourer and Nicholas Kini Kwame, an 18-year-old student have been charged with conspiracy to murder and murder of Ishmael Mensah Abdallah.

The Court, presided over by Mrs. Rosemond Vera Ocloo, preserved their pleas.

The accused persons are expected to reappear on April 20 as investigations into the matter is ongoing.

Narrating the facts of the case, Chief Inspector Ernest Agbo, said the complainant in the case is Frank Mensah Abdallah, a public servant residing at Coca-Cola, near Lamptey Mills in Kasoa.

Chief Inspector Agbo said Nyarko is a mason labourer and neighbour to the complainant, whiles Kwame is a student residing at Lamptey Mill, a suburb of Kasoa.

The Court was told that Nyarko and Kwame had been friends since 2008 and for some time now, Nyarko had been watching Ghana Television channels, which entertained mallams and other spiritualists who promoted their prowess in making people instant millionaires.

The prosecution said Nyarko informed Kwame who advised that there was a certain spiritualist in Volta Region who could assist them.

Chief Inspector Agbo said, Kwame who did not own a phone, provided phone number of the said spiritualist to Nyarko who had access to his mother’s phone.

The prosecution said after contacting the said spiritualist, she (the spiritualist) agreed to help if only Nyarko could provide a human being and cash in the sum of GHC5,000 for the rituals.

The prosecutor said on April 3, this year, the accused persons settled on Ishmael Mensah Abdallah, now deceased aged 10, 11 months, the son of the complainant.

He said Kwame went to hide in an uncompleted house near Nyarko’s house and the two planned to embark on their operation.

According to prosecution, the accused persons armed themselves with a club, cement block and a shovel with Nyarko, who was close to the deceased, lured him into the uncompleted building.

The prosecution said Nyarko informed the deceased that his friend was selling a video game.

He said Nyarko initially planned to kidnap the deceased and demand ransom of GHC5,000 from the deceased mother, which they would add, so they could send the victim for the ritual.

The prosecution said when the victim arrived, the accused persons realised that kidnapping the victim would be a difficult task, so they decided to kill him.

It said Kwame picked a club and hit the victim hard on the neck from behind and Nyarko also used cement block to hit the victim’s head killing him instantly.

The prosecution said, Nyarko’s younger sister, aged eight, felt something was going on so she walked toward the direction of the accused persons but she was driven away by Nyarko.

It said the accused persons after murdering the victim, dug a hole and buried the victim and left the scene with the intent that they would return in the night to convey the body to the Volta Region for the ritual.

The prosecution said luck eluded the accused persons when Nyarko’s sister went to inform her father (Mr Nyarko) who is a step father to Nyarko (the accused person) that something had happened in an uncompleted building.

It said Mr Nyarko went to the scene and saw that the place had been “disturbed” and when he decided to remove the surface sand, he found the body of the deceased (the victim) buried and covered with sand.

He said accused persons were arrested and handed over to the Police.

The prosecution said efforts were underway to close up with the said spiritualist for her arrest.