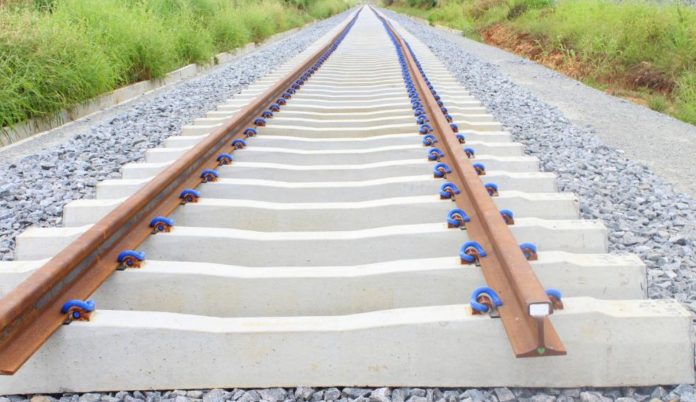 The Tema-Akosombo Railway Project is progressing steadily with 70 per cent of construction works done.

Out of the 97.625 Kilometer railway line expected to be completed by July 2021, 93 Kilometers of formation just below the subgrade level had been done, 65 kilometers of Skelton Tracks had been laid and 138 out of 156 structure culverts and bridges had been completed.

In addition, 200,000 steel-reinforced concrete sleepers – produced in the country, had been casted with many others being produced.

On the Volta Lake, where a 300-metre rail bridge at Ogoli, near Juapong in the North Tongu District was currently under construction, some 18 out of 30 pile foundations had been completed and a few others were being worked on.

The Railway Project is part of the Tema-Mpakadan railway under the Ghana-Burkina inter connectivity railways project which is being constructed by AFCONS Infrastructure Limited, an Indian construction company.

The Ghana News Agency (GNA) made these observations during a monitoring and verification visit to the railway construction sites with officials of Penplusbytes and the Ghana Railway Development Authority (GRDA).

The visit, which was a validation of citizens’ reports on government’s assurances under the “Connecting Citizens to Parliament II” project being implemented by Penplusbytes with technical support from OSIWA, afforded the team the opportunity to assess at first hand, the veracity of aggregated claims and feedback sent on digital platforms by citizens.

Mr Jeremiah Sam, Deputy Director, Programmes, Penplusbytes, addressing the media said, the visit was testament of the contribution of new media and digital tools to entrench citizens’ participation in governance and providing an easy and impactful avenue for expanding the democratic space.

“What we seek to do is use technology to assist the Committee on Government Assurances (CGA) to enable citizens to be a part of the legislative process and further play an effective oversight role by engaging them on various government assurances using new digital tools, ” he said.

He observed that the claims by citizens in the construction communities, corroborated what the team had observed as work was ongoing impressively and said “the outcome of the visit would form part of a policy brief to be generated and passed on to the CGA ahead of their own monitoring visits after which a final report would serve as evidence.”

Maame Yaa Agyaa Ayensu, Corporate Affairs Manager, Ghana Railway Development Authority, said the project which was anticipated to be completed by close of August 2020 has had to delayed as a result of some unexpected challenges including the Covid-19 pandemic which affected some 82 workers of the construction company.

She said the encroachment of Railway Company lands was a major challenge, adding that appropriate compensations had been duly paid to affected land owners.

She said the Railway Redevelopment Projects was 70 per cent freight and 30 per cent passenger mix and would go a long way to accelerate the country’s socio-economic growth.

As part of the 30 per cent of the project to be completed, she said, some stations would be constructed, including a freight terminal at Tema Harbour to facilitate the transportation of goods inland .

Mr Gupta Asim, Head of Legal, AFCONS Infrastructure Limited, told the GNA that with progress of work so far, the project would be completed in March, four months ahead of the originally scheduled date.