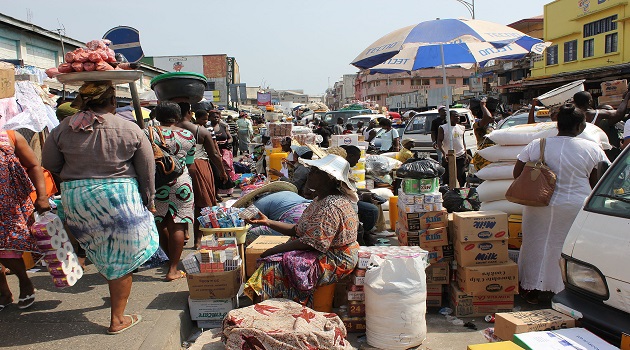 Traders at the Tema Community one market on Monday appealed to the authorities to come to their aid as the constant flooding at the market makes it difficult for them to carry on with their daily activities.

The traders said the market had deteriorated in recent times, as a result anytime it rained heavily, the place got flooded and accessible to their shops were not possible, whilst their goods got damaged.

The traders told the Ghana News Agency (GNA) at Tema that after last Sunday’s heavy downpour, the whole market got flooded and goods worth thousands of cedis got spoilt in the shops.

Madam Enyonam Attipoe, a material seller, said “almost all the materials in the shop got wet, last Sunday’s downpour was too much, the zips, stiffs, the materials are all wet, as for the stiff the moment water touches it, it becomes a waste material because nobody would want to buy it”.

Aunty Esi Yeboah, a shop owner, lamented, “most of the things in my shop got spoiled, pampers, tissue, and some sanitary pads are all wet and I have to bear the cost now”.

Even though he expressed concern about the condition of the market, he however attributed the situation to the unwillingness to participate in the monthly general clean-up exercise which was supposed to be done first Saturdays in every month.

Mr Nyawoli said whenever it was time to do the general cleaning many of the traders would give series of excuses and when left undone, ended up with gutters being choked with filth and flooding whenever it rained in the market.

Mr Ebenezer Cudjoe, the Tema Metropolitan Director of the National Disaster Management Organization (NADMO), in an interview with the Ghana News Agency at Tema, said NADMO had educated and sensitized the traders on weekly basis on measure to put in place to reduce the rate of flooding in the market.

He said anytime it was about to rain, some of the traders would deliberately dump refuse in the gutters which ended up causing the flood; adding that, NADMO had gone there on several occasions to clean-up the refuse but within some few days the place would be filled with refuse again.

Mr Cudjoe said NADMO was aware of their plight and was putting measures in place to curb the flooding problems in the market, but called for cooperation from the traders.