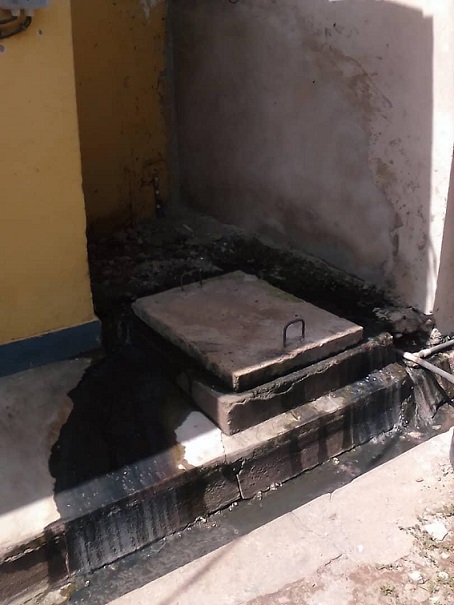 Scores of Residents at Community Two Mangoase in the Tema West Municipality on Thursday expressed concern over the deplorable states of sewage system making their living condition unbearable.

The residents complained that the sewage system have created an environmental unfriendliness.

The residents who spoke to the Ghana News Agency at Tema described the sewage problem as a health time bomb as the rains set, there were leakages on the lines, which drips into main drains and gutters associated with pungent smell.

According to the residents, the problem started over a year ago, now some gutters were choked with lavatory, the situation was getting worse daily and there was the need to whimper out for assistance.

Mr George Koo, a resident, told the GNA “it had been a year since they encountered this problem, it started from Comville Hotel area through to John Bosco School down in between some houses and pathways now we can’t stand it”.

Mr. Kwadwo Tetteh, said his household now lives with the pungent smell daily as a sewage line passed through his house connecting to the main sewage, which was leaking, “you can imagine our state of affairs?

“We reported it to the Assemblyman in the early stage, he came with the waste management team and attended to the problem, but when the worst happened we reported as usual, we are still waiting for their action,” he said.

According to Mr Tetteh, the Assemblyman told the residents that, “this time round the situation could not be solved immediately as it was a major problem, so the assembly would be contacted, but till date nothing had been done, we are suffering”.

According to the residents, they were ready to foot the bill for the repairs; “all we are asking the authority is for an estimate and we would repair the damaged sewages by ourselves as we have been doing since time immemorial”.

Meanwhile the Sewage Director of Tema West Municipal Assembly, assured the residents through the GNA at Tema that “they are mobilizing to address the issue, very soon”.