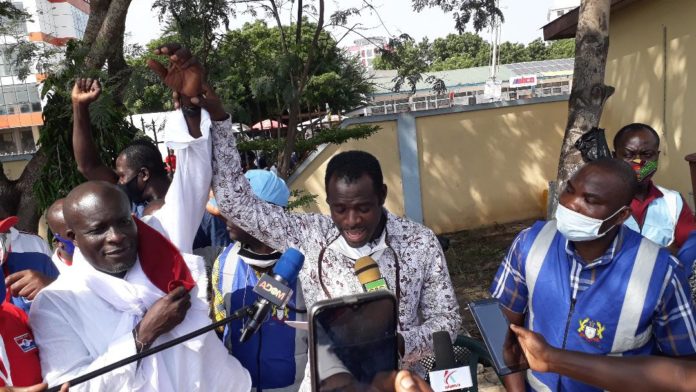 The Member of Parliament (MP) for Tema East has won a the slot to represent the New Patriotic Party (NPP) in the 2020 General Election.

The polls, which was keenly contested, saw Mr. Daniel Titus-Glover emerge with 522 votes ahead of his rival, Mr. Benjamin Ashitey Armah who had 233 votes.

In a speech after the elections on Saturday at the OLAMS Senior High School, Mr. Titus-Glover informed that, “All along, I have been looking at the 7th December polls; we see this one as a normal internal competition and I give my rival a thumbs up.”

He observed that his rival had a match and was going to learn his lesson, adding that, “In this party, I keep saying, you must serve. If you don’t serve, there is no way delegates would give you their mandate. Come and learn the rudiments in the academy called NPP before you would be entrusted to lead the party.”

Asked about how he would bring the factions in the constituency together, he said, “Normally after competitions like this, the wounds are deep and the cuts are too severe; you leave the wounds to heal naturally then we would see how we can go about it.”

He was however worried that, after losing the competition, his opponents may not be willing to help but may be tempted to destroy the efforts to win the forth-coming general elections.

That notwithstanding, he said, “This is the beginning of the victory in the December 7 polls. I have told the President, we are going to give him ten thousand votes so he could continue the good work he is doing. Again, I am my team are going to increase our votes from the 4,025 and more.”

He downplayed the fact that his contender for the seat, National Democratic Congress candidate for Tema East, Mr. Ashai Odamitey posed any serious challenge to his bid, arguing that “he would be the worst NDC candidate in the history of Tema East politics.”

He observed that, “Mr. Odamitey has no base when it comes to NDC politics after being handpicked to be the Metropolitan Chief Executive (MCE) of Tema by former President John Mahama.”