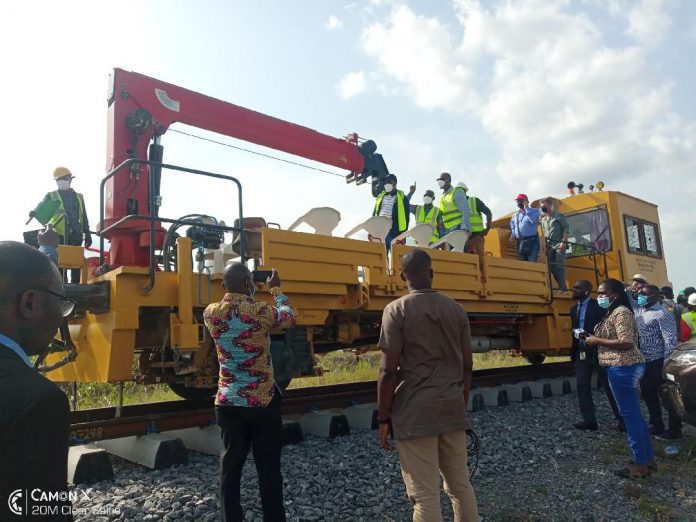 Mr John-Peter Amewu, Minister of Railways Development, says about 80 percent of the 97 km Tema-Mpakadan railway line has been completed.

Mr Amewu, said the rail construction work was progressing, adding, he was quite encouraged by what the construction company was doing so far.

During the tour, the Minister and his entourage paid a courtesy call on Odeneho Kwafo- Akoto III, the Akwamuhene at his Palace at Akwamufie in the Eastern Region.

The Minister formally introduce himself to the Paramount Chief and as tradition demanded, briefed the Chief on the ongoing rail construction works in his traditional area.

Mr Amewu’s tour also took him to the construction site of the Mpakadan Rail head Terminal at Mpakadan and the Volta Rail Bridge at Senchi both in the Eastern Region.

He also inspected the Doryumu Railway Station and the completed track works at Kilometre (Km) 27 to Km 34.

The Minister said the major challenge so far had to do with chainage 97; where the rail line ends, that is the Mpakadan itself.

Mr Amewu said it was important to have a terminal there, however the terminal had not been built into the contract, “so we’ve started some discussions to see how that terminal can be worked out”.

“It would not be anything that would be quite expensive, it would just be a ramp port, that can encourage loading and offloading of some of the containers when they arrived from Tema Port.”

He said the Ministry of Transport was in-charge of the dredging and remove of tree stumps in the Volta Lake to facilitate free movement barges (shoal-draft flat-bottomed boats, built mainly for river and canal transport of bulk goods).

The Tema-Mpakadan rail line is part of the 1,000km Ghana-Burkina Faso Railway Interconnectivity Project which will link Ghana from Tema to Burkina Faso’s capital Ouagadougou.

With regards to the Ghana-Burkina Faso railway connectivity project, Mr Amewu said his Burkinabe counterpart was expected to meet him in Accra for discussions.

He recalled that they both held a meeting on the project in Ouagadougou about three weeks, during which they laid down the framework for the project.

“We’ve gone so far, we are now at the third phase where we are asking for request for proposals. Three companies have been short listed for that section and immediately we complete the process for proposal, we expect construction to start latest by November 2022.

He said that section of the project would be on build operate and transfer (BOT), but what Government would be doing on its own to improve the financial viability of the project was for them to continue the Tema-Mpakadan section.

Mr Amewu said the Ministry of Finance had already approved the purchase of two coaches for the Tema-Mpakadan rail line for the transportation of passengers.

Mr Yaw Owusu, the Chief Executive Officer of the Ghana Railway Development Authority, said the two diesel multiple units coaches were expected to arrive in the country before the completion of the Tema-Mpakadan railway line construction.

During the Minister’s courtesy call on the Akwamuhene, he lauded the Paramount Chief for his support for the project.

He told the Akwamuhene, that the Government was committed to the development of the railway industry as part of efforts to accelerate the country’s socioeconomic.

Odeneho Kwafo- Akoto III appealed to the Minister to ensure that pedestrian bridges were constructed along side rail bridges.

He urged the Government to ensure that adequate compensations were paid to the allodial land owners.

He also appealed to the Minister to ensure that community durbars were held to get the people informed of the project.

The Akwamuhene further appealed through Mr Amewu to the Minister of Roads and Highways to ensure that the main road leading into the town, Akwamufie was repaired.

On his part, Mr Amewu assured the Akwamuhene that his outfit would ensure that the community engagements on the project would be held within 30 days.