Tema Newtown is one of the Ga-speaking indigenous communities in the Greater Accra Region of Ghana, situated close to the sea.

With a population of about 20,000 people, majority of inhabitants-both the men and women sometimes children- depend on the ocean for their livelihood.

The sea is their most cherished asset for their survival.

Aside fishing, the beaches also serve as avenues for entertainment activities which are often commercialized by both locals and business people.

But this is gradually threatened because of how the water body is being treated in recent times.

One of such is the popular ‘5’ beach located in Tema Newtown which is now a shadow of itself due to the insanitary conditions here.

Emmanuel Kobina, is a resident who has lived here for the past 21 years. For him, the dirt at the sea-shores is new normal.

“We have been here for the 21 years and we have been told the filth is a seasonal thing. When the sea is dirty, it always brings the dirt out to the shores like this”, he told SOA fellow, Jackline Favour Asassey.

It is estimated that this community produces about 14,800 tons of waste daily, of which about 2,072 tons are plastics illegally dumped along the coastal area.

Emmanuel lamented that, “the sanitation situation over here is very poor; people also think it is because we are illiterate but I don’t believe it. I think when the sanitation agent is being paid well, we would have a clean environment. I think cleaning the beach should be compulsory for everyone.”

These substances negatively affect algae, sea urchins, fish, and mammals in the ocean as well as coral reefs. Most die of starvation as their stomachs are filled with plastic debris.

Over 1 million marine animals including mammals, fish, turtles, and birds, are killed each year due to plastic debris in the ocean. Currently, it is estimated that there are 100 million tons of plastic in oceans around the world.

Plastic waste can encourage the growth of pathogens in the ocean. According to a recent study, scientists concluded that corals that come into contact with plastic have an 89 percent chance of contracting diseases.

At the time of the visit by the SOA team, the sea had vomited a wide range of plastics and other wastes to the shores.

Both women and young men were frequenting the shores to fetch water for their home chores and other business activities.

One can visibly see plastics and other wastes in the water even from meters away.

This confirms a UK-based Eunomia Reseascha and Consulting report that revealed more than 80 percent of the annual input of plastic litter, such as drink bottles and plastic packaging, comes from land-based sources.

The remainder, according to the report, comes from plastics released at sea, such as lost and discarded fishing gear.

The danger is that at least 800 species worldwide are affected by marine debris, which as much as 80 percent of that litter is plastic, according to the United Nations.

It is estimated that up to 13 million metric tons of plastic ends up in the ocean each year which is an equivalent of a garbage truck load worth every minute.

Humans are not immune to this threat While plastics are estimated to take up to hundreds of years to fully decompose, some of them break down much quicker into tiny particles, which in turn end up in the seafood we eat.

Plastics have been identified to take 100 years to degrade in the environment.

Efforts to address the menace

In July, 2017, private company FanMilk Limited launched the ‘Pick-IT’ project with the Tema Traditional Council and the Tema Metropolitan Assembly to test the feasibility of waste collection.

Tema Newtown and neigbouring Kpone were the targets due to the notorious nature of the insanitary conditions at the beaches and sea.

Metropolitan Chief Executive of Tema, Felix Mensah Annang Nii La, at the time commended the company for introducing the ‘Pick it’ project which will ensure the collection of plastic waste and rubbers from the streets.

He promised to follow the progress of the sorting centre and ensure it receives the necessary support it deserves from the Assembly.

But though the intervention has since its inception help collect over 7 tons of plastic and sold them to recyclers, the insanitary situation keep worsening especially at the beaches.

The NESSAP 2010 report estimates that 12,710 tons of municipal solid waste are generated per day in Ghana, 14 percent of which is plastic.

Another resident, Teye Joshua who leaves close to the shore in Tema Newtown, admitted residents indiscriminately produce most of the waste.

“We the people living here are to be blame for the filth in the sea.”

Unless action is taken soon to address this urgent problem, scientists predict that the weight of ocean plastics will exceed the combined weight of all of the fish in the seas by 2050.

Due to the magnitude of the situation globally, President of the UN General Assembly, Maria Fernanda Espinosa Garces, for instance, included the issue of plastic pollution as a priority during the 73rd Session.

“if we get this right, if we win the battle against plastic pollution, it will not only be a tangible victory for people and planet, but a clear example of how the United Nations is relevant to the lives of citizens around the world.”

Locally, there are calls for local assemblies to recruit guards at the sea or beaches in the coastal areas to help improve the conditions there.

Read Also: Unsung & undervalued: How a plastic waste collector in Ghana risks his life to defend our ecosystem

The late John F. Kennedy once said, “We are tied to the ocean. And when we go back to the sea, whether it’s to sail or to watch-we are going back from where we came.’’

This report was produced with support from SOA Ocean Solutions Micro-Grant. 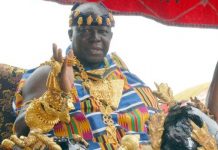