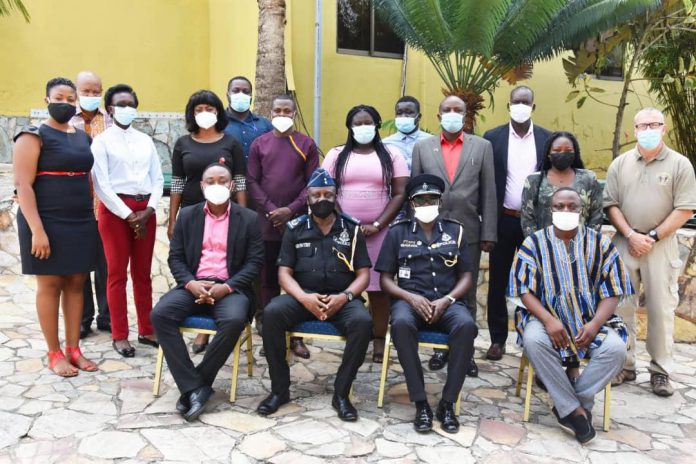 The Police Commander, accompanied by his deputy and some officials of the Regional Command, met the Traditional Council, District Chief Executives (DCEs), and officials of Electrochem Ghana Limited and called on all parties to exercise restraint as the Command had initiated processes to ensure peace in the area.

He called for a peaceful resolution of the conflict through collective negotiations for the mutual interest of the parties involved, and said the police command would not countenance unlawful rioting in the event of such disagreements.

DCOP Barima Tweneboah Sasraku II, assured the traditional leaders of his readiness to support the Traditional Council in finding a lasting solution to the problem.

Nene Abram Kabu Akuaku III, the Paramount Chief of Ada said they were fully in support of the project, urging the Police to deal ruthlessly with disputants fermenting trouble in the area because of their objections to the concession agreement.

He pledged his unwavering support to the police and further called on them to support the District with more personnel to deal decisively with the increasing number of crime in the area.

He subsequently paid a visit to the offices of Electrochem Ghana Limited, where Mr Daniel Mckorley, Chief Executive Officer of the McDan Group of Companies expressed disappointment at the sudden opposition by some groups in spite of the enormous developmental benefits the area stood to gain.

Last week, some residents of Big Ada in the Ada East District of the Greater Accra Region embarked on street demonstrations against the Ada Songor Lagoon Basin Concession Agreement between Government and Electrochem Ghana Limited, a subsidiary of the McDan group of companies, which gives the company control to mine salt in a landscape of 1548.4 square kilometer.

The protest, which brought together residents from some communities within the Ada Songor Lagoon Basin enclave, was a follow-up to several press conferences organised by the people of Ada to kick against the issuance of licenses to Electrochem Ghana Limited to mine salt in the disputed area.

The demonstration, which resulted in a clash, recorded injuries as some residents of Toflokpo-Salon, a community in Ada, sustained gunshot wounds in their attempt to prevent ongoing survey works in the area by workers of the company.