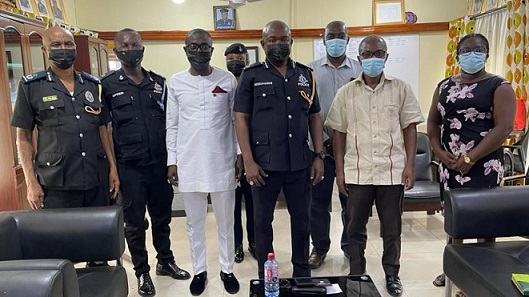 The Tema Regional Command of the Ghana Police Service and the Ghana News Agency Tema Regional Office on Thursday set-in-motion mechanism to work together towards the promotion of security within Tema and its environs.

This came to light when a team from the GNA-Tema office led by Mr Francis Ameyibor, Regional Manager paid a working visit to the Tema Regional Police Headquarters to hold discussion with the Deputy Commissioner of Police (DCOP) Barima Tweneboah Sasraku II.

Mr Ameyibor indicated that while the Police was mandated to maintain law and order as well as to prevent and detect crime, to apprehend offenders and to maintain public order and safety of persons and properties, GNA as a state media apparatus plays critical role towards enforcing national security.

He said GNA had the strength to handle the communication part of national security and serve as a platform for security to educate residents on the new trend in crimes and how to stay protected in the Region.

Mr Ameyibor said as key state institutions, it was important that the two organizations collaborated to reach the common goal of protecting the citizenry; “GNA will assist the police to defuse fake news circulation through publication of truthful and unbiased information.

“We are determined to fulfil our mandate as a state media whose major task is to maintain national interest, contribute to ensure peace and security, build cohesion and joined forces with other state entities to protect the state”.

DCOP Barima Sasraku II who is the Jukwaa-Mfuom Hene and Denkyira Abuakwa Adontenhene, on his part expressed joy at the collaboration, saying it was welcoming news as the increase in fake news was worrying.

He added that news in this era had become swift with some media personnel using the power of the media to defame and ridicule people, thereby making it difficult for some institutions to embark on such collaborations with the media.

The Tema Regional Police Commander said in their quest to scoop others, some ended up publishing wrong information and later expected the police to comment on the issue.

“Our ethics and morality will not allow us to talk on policy issues without clearance, but sometimes media personnel want us to talk about it…media must also understand the police chain of communication,” he said.

DCOP Barima Sasraku explained that the Police Service, was a very compact but flexible organization, with the aim to protect life and property; prevent and detect crime; apprehend and prosecute offenders; preserve peace and good order.

“We are also mandated to enforce all laws, Acts, Decrees, and other regulations with which it is directly charged, so the media must understand that for the sake of public safety and national security we cannot divulge every information,” he said.