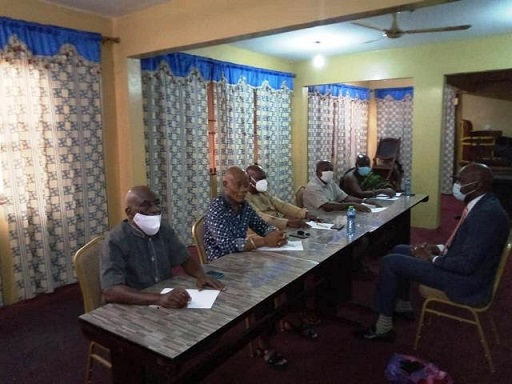 The Tema Traditional Council (TTC) has initiated interview sessions with persons who are aspiring to be nominated as the Metropolitan Chief Executive of Tema by the President in his second term.

The President is required by Article 243 (1) of the 1992 constitution and section 20(1) of the Local Government Act 936 to nominate district chief executive officers.

In all, a total of 11 people including the Mr Felix Mensah Nii Annang-La, the incumbent MCE of Tema, Dr Benjamin Ashitey Armarh and Mr Charles Forson, former aspirants for the New Patriotic Party’s (NPP) parliamentary primaries for Tema East and Tema Central respectively.

Nii Amarh Somponu II, Tema Shipi speaking on behalf of the Tema Traditional Council at the start of the one-week long engagement said this was the first time they were meeting with aspirants before making their choice known to the government.

Nii Somponu indicated that they initiated the engagement to enable them make an informed choice for whom they want to be the MCE as they know their opinion would be sought by government on a nominee.

“We have a say per the constitution in the nomination of the various DCEs. It is not a case of just pick and choose, but we must have basis for whoever we are recommending for nomination, there are various aspirants so we think that we must conduct some interview to know who is fit for the job before we give approval for a candidate”.

He stated that even though the Council would love to have an indigene as the MCE they would not reject a non-indigene who impresses them saying “when circumstances changes you change your tactics”.

On whether the TTC’s expectations of successive MCEs had been met, the Tema Shipi indicated that “I wouldn’t say our expectations have been met, we have a catalogue of problems, we are still not making headway that is why this time we are careful to voice out that we are for candidate A or B because things are retrogressing every day, we don’t think what we expect is what we are seeing that is why we have decided that before we add our voice we must be double sure of who we are nominating”.

Some of the aspirants agreed that Tema has a myriad of problems including development, security, unemployment and infrastructure such as recreational centres, libraries, first class schools, hospitals and toilets.