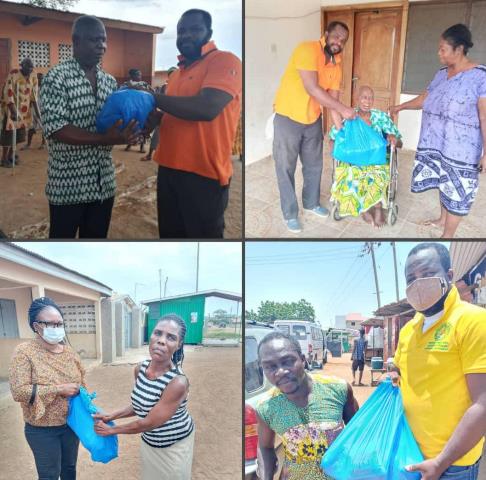 The Tema West Municipal Assembly (TWMA) has distributed food items to local disability groups as part of the assembly’s efforts to alleviate their sufferings in the wake of the partial lock down in Greater Accra.

Speaking to the Ghana News Agency (GNA) on Friday, the Chairman of the Disability Fund Management Committee (DFMC) of the Assembly, Mr. Charles Narhteye, informed that “as soon as the lockdown was announced, we received calls from some PWDs in the Municipality expressing the difficulty that awaited them in the exercise.”

Mr. Narhteye said the committee then liaised with the TWMA to release 20,000 Ghana Cedis being the balance of the committee’s share of the Common Fund.

He said, using the data base of the DFMC, the committee targeted 300 PWDs in communities within the Municipality which included Sakumono, Communities 2,3,5,16,17,18,19,20, Klagon, Adjeikojo, Kotobabi, Kanawu, Promise Land and Borteyman.

Mr. Narhteye informed that during the distribution exercise, they realized that there were some PWDs who could not even come out of their rooms and therefore needed the help of other people to receive their gifts for them.

Adding that it would be difficult for government to be able to identify such persons during emergency situations.

“Therefore there is the need for government to liaise with representatives of the Ghana Federation of Persons Living with Disability (GFD) in the districts in order to identify PWDs and assist them in emergency,” Mr. Narhteye said.

Mr. Narhteye informed that the global pandemic had brought a lot of hardship to PWDs in the Tema West Municipality as well as other districts in the nation, and that “Government should really provide help to assists such persons.”

He advised PWDs to adhere to all the protocols and education on the COVID-19.