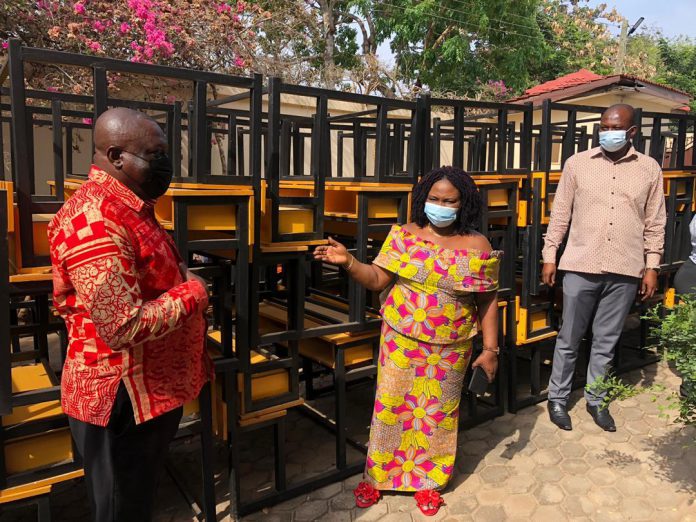 The Tema West Municipal Assembly has presented 180 dual desks to the Municipal Directorate of the Ghana Education Service for onward distribution to public schools within the Municipality.

The Assembly through its Common Fund procured the desks to meet the increasing enrolment needs in public schools and to enhance quality education in basic schools.

Mrs Adwoa Amoako, Municipal Chief Executive, Tema West Municipal Assembly, speaking at a brief handing over ceremony said the desks, which had come promptly were meant among other things, to promote quality education.

She said the assembly recognised educational infrastructure as vital to improving academic excellence, hence it would continue to provide such infrastructure.

According to the MCE, the assembly would not relent on its efforts in the provision of an all-inclusive education with a huge investment in educational infrastructure which had culminated in improved school access and increased enrolment.

She mentioned development projects undertaken since the inauguration of the Assembly in 2018 as the construction of a training centre at Adjei Kojo State School for the Deaf.

Other projects were the construction of a two-storey six-unit classroom block at the Tema Senior High School and Lashibi Basic School, renovation of Sakumono Primary School block, and construction of a Library at Community 14.

Mr Francis Steele, Municipal Director of Education, Tema West, who received the dual desk for subsequent distribution, expressed appreciation for the continuous effort by the Assembly to enhance teaching and learning.

He said, previously, the Member of Parliament for Tema West, Mr Carlos Kingsley Ahenkorah had presented 1,000 desks to schools in the Municipality as the additional dual desk would complement the efforts to lessen the challenges.

He assured the MCE of effective monitoring on the use of desks in the beneficiary schools, so they would not deteriorate too soon.

Speaking on measures taken to stop the spread of COVID-19 in schools, he said “places like Adjei Kojo, Klogon Basic Schools with a classroom population of about 110 and 120, it became imperative to divide the classes and run a shift system to curtail the spread of the virus.”