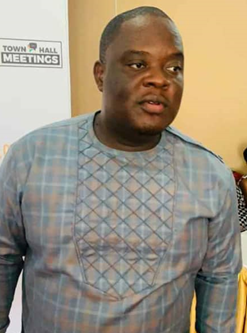 Kwesi Poku Bosompem, former Presiding Member of the Tema West Municipal Assembly has called Dennis Amfo-Sefah, Tema West Constituency Chairman of the NPP as the finest Chairman that the party has ever had.

“Throughout the party’s history, we have had Constituency Chairmen, but none comes close to you. Your neutrality is legendary and I am actually glad that you won against me to become Chairman,” he said.

Mr Bosompem, who was at the party office to pick his forms as a hopeful for the 2020 Parliamentary ticket, said Mr Amfo-Sefah, popularly known as Nana Boakye, as also a Chairman well cut for the job.

His words was surprising as he was known to be a bitter rival of Nana Boakye against whom he had some allegations.

While contesting against Nana Boakye for the Chairmanship of the Constituency of the party, Kwesi Poku Bosompem’s rivalry with the current Chairman was based on fault lines between the so-called camp of Irene Naa Torshie, former MP for Tema West, and the current MP, Carlos Ahenkorah.

Nana Boakye was branded as a boy of Carlos Ahenkorah, while Kwesi Poku had openly been portrayed as one of the lackeys of Naa Torshie.

The contest eventually ended in favour of Nana Boakye and left many fearing that the result, which followed Carlos Ahenkorah’s defeat of Naa Torshie in 2015 for the 2016 Parliamentary ticket, would crack up Tema West NPP badly.

However, according to Kwesi Poku himself, “since you became Chairman, you have unified our party even more and now placed us on a fine footing to wallop the NDC again in the 2020 election.”

Kwesi Poku added that Nana Boakye’s fine leadership of the NPP in Tema West would be crowned with a wider victory margin in December 2020.

A humbled Nana Boakye, who handed over the forms to Kwesi Poku’s thanked his former contender for his kind words, saying his candour has even spurred him on to be a more resourceful Chairman.

“We all know our common enemy is not within our party, but outside and so all I can say is I will continue to be fair and firm,” Nana Boakye said.

He advised Kwesi Poku to put the party first in everything that he did. Earlier, the Chairman also advised Carlos Ahenkorah to avoid temptation to lower parliamentary standards. “Intelligence is about debates and discussion” Nana Boakye said.