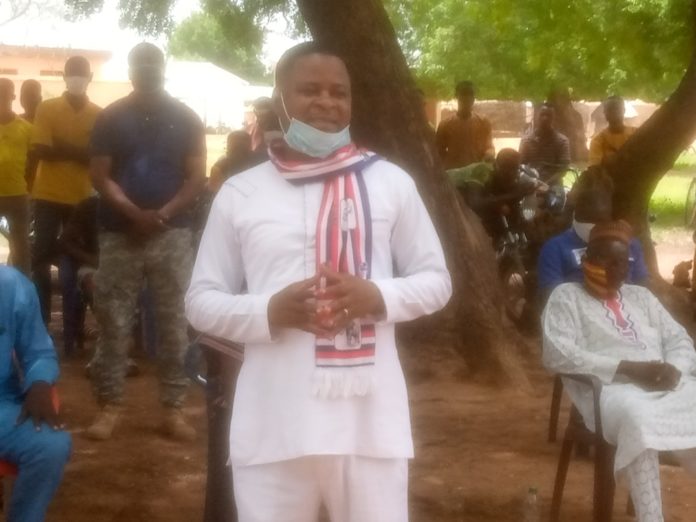 The massive infrastructure development and numerous social intervention policies being implemented in the Tempane Constituency by the government has significantly improved livelihoods and made the area a model constituency.

Mr Joseph Dindiok Kpemka, the Deputy Attorney General and Member of Parliament (MP) for the area said this when he addressed delegates of the New Patriotic Party (NPP) at Tempane in the Upper East Region after being acclaimed by its national executive committee as the party’s 2020 parliamentary candidate.

“I will like to say unequivocally that Tempane is gradually becoming the stronghold of the NPP in the region and we are determined by the kind grace of God to consolidate the gains made in 2016 and win this time by even a very wide margin”.

“I can tell you without a doubt that the policies that have been implemented by the government, such as the Free Senior High Education, Planting for Food and Jobs, One Village One Dam among others coupled with massive infrastructure in various sectors in this constituency has made the Tempane seat a done deal for the NPP,” he stressed.

The Deputy Attorney General noted that there was no constituency in the region, which had received more of the national cake than his area and pledged to work hard with the leadership of the party in the area for the NPP, not only to retain the parliamentary seat but ensure that they won the presidential election for the first time since its creation.

On water and sanitation, the MP stated that about 99 boreholes were being drilled across various communities, six Small Town Water Systems had been constructed while six water closet toilet facilities were nearing completion.

On education, Mr Kpemka stated that apart from the 13 different schools that were being constructed, two new dormitory blocks had been put up while an uncompleted one was finished and ready for use.

A 12-unit classroom block and another 12-unit storey classroom block for the Tempane Senior High School were being built to ensure that the school was taken off the double-track system, he added.

The Deputy Attorney General stated that apart from constructing 10 stores each at three different market places to boost the Assembly’s revenue mobilization, many of the youth in the area had gained employment at various sectors of youth employment models.

Alhaji Bashiru Ibrahim, the Deputy CEO, Youth Employment Agency in charge of Operations indicated that all the supporters of the party had resolved to support Mr Kpemka to win again in the December general elections, “because he has shown great leadership and deserved to be given another four years to represent the people.”

The Deputy CEO explained that in terms of infrastructure and aid to the vulnerable in the constituency, the records of the MP were unmatched and said the party leadership would continue to work in unison to cement the seat and secure presidential win for President Akufo-Addo.

This is the second time Mr Kpemka is going unopposed after 2016 and he is the only candidate not being contested in the Upper East Region.