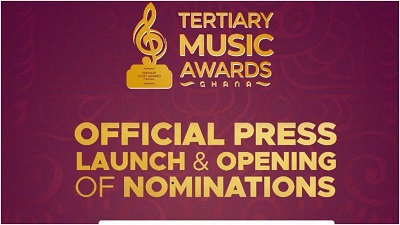 The maiden edition of the Tertiary Music Awards (TMA) has been launched in Accra with nominations opened.

The awards scheme which seeks to recognize, award, and promote musicians is centered only on artistes at the tertiary level.

Mr. Duke Sowah, the Chief Executive Officer of TMA said the scheme aims at impacting the Ghanaian music industry as well as encouraging artistes at the tertiary level.

He said the initiative is managed by Tertiary Music Awards Ghana Limited, a limited liability Organization.

Mr. Sowah explained that the project was aimed at creating awareness to students at the tertiary level and the need to attain education whilst pursuing their talents.

“This project aims at consciously creating a general awareness to tertiary level students on the need to attain higher education in addition to the pursuit of talents, which is music.”

He said the awards scheme was working closely with some top record labels, media houses, and online streaming platforms to offer winning artistes opportunities to help them flourish in their career.

“As an award scheme, we value integrity, accuracy, transparency and we promise all stakeholders that we would guard these values,” he said.

Mr. Desmond Cwesi Oteng, the Public Relations Officer (PRO) of the scheme indicated that there were 29 categories for nominees and urged all interested persons to log on to the project’s website, www.tertiarymusicawards.com.

He said there would be a 60-day interval for filing nominations.

Mr. Richard Kyere Alexander, Head of Marketing for TMA assured that the scheme had come to stay and expressed his gratitude to supporters.