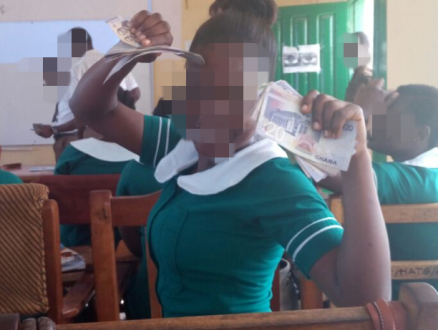 Investigations conducted by News Ghana indicate that final year students of the Nursing and Health Assistant Training School (HATS) at Teshie near Accra are being compelled to purchase various items for the principal, Mrs. Helen Gifty Dwamena Amoah and others.

The items are said to be given to her as a Principal, the Chief Examiner for nursing examinations, Programme Heads and Invigilators as a form of appreciation.

The outrageous list, which has not been given to the students on their bills but were informed by their various representatives to pay the amount has sent shivers down the spine of the soon-to-be nurses who some of them are struggling to pay their school fees.

It must be stated that nursing students in the institution are paying between 1500 and 1600 for the current academic year.

One of the students who spoke to this reporter on anonymity said, “It’s very devastating because some of us are struggling to pay our normal school fees and we are being asked to pay this money. Where are some of us going to get the money from? We are appealing to the Ministry of Health (MOH) to come and save us.”

It must be emphasized that three different batches of nursing students numbering about 500 will be completing their various nursing programmes between August to November 2017 and are all to pay the amount of money which has not be stated on any official bill to the students.

The practice of forcing students to pay an amount of money to purchase the various items for the Principal, Programme Heads, Chief Examiner and Invigilators has been the case since the health institution was established.

When contacted about the practice in the health institution, Public Relations Officer (PRO) of the Ministry of Health, Robert Cudjoe expressed surprise at the practice and promised to investigate further to ascertain the truth or otherwise of it.

Further investigations conducted by News Ghana indicates the Principal, Mrs. Dwamena Amoah does not listen to anybody in the school, not even the teachers who are assisting her to train the nurses and that she does things in her own ways.

Several attempts by News Ghana to get a reaction from the Principal of the Nursing and Health Assistant Training School in Teshie, including phone calls and two text messages was unsuccessful as she failed to respond.

The Teshie Nursing and Health Assistant Training School (HATS) was established on January 28, 2008 to train middle-level cadre to assist professional nurses in carrying out their duties, and to contribute to the improvement of the staffing situation in the clinical area. Enditem

US$1.72 Billion needed for Refugees and Migrants From Venezuela