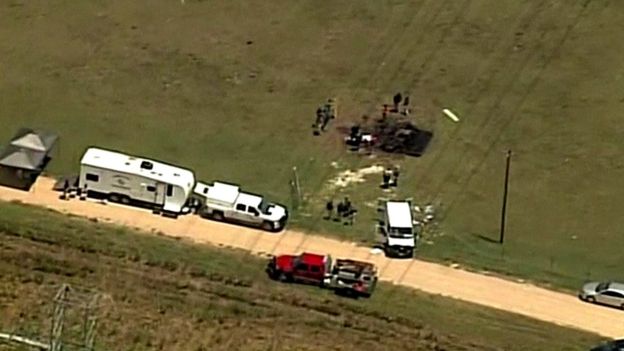 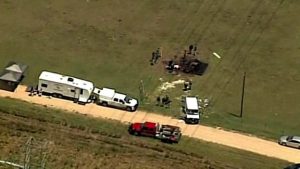 The balloon came down in fields near Lockhart, about 30 miles (50km) south of the state capital Austin.
Caldwell County sheriff Daniel Law said the basket of the balloon was on fire when emergency crews arrived.
Videos posted by local media suggest the balloon came down near tall power lines, but the cause is not yet known.
The balloon crashed at about 07:40 (12:40 GMT), officials said.

“It does not appear at this time that there were any survivors of the crash,” the sheriff’s office said.
Local resident Margaret Wylie said she was outside her home when she heard two “pops” which she thought was a gun going off.

“The next thing I knew you saw a big fireball go up. I was just praying that whoever was there got away from the thing in time,” she said.
s”.
He said the balloon was believed to have belonged to the Heart of Texas Balloon Rides, an Austin-based company that offers trips to see the sunrise with champagne.

A Fox News reporter from Lockhart who is at the scene says contact was lost with the balloon about half an hour into a scheduled one-hour flight.

Two years ago, the NTSB called for better regulation of hot air balloon flights in the US, recommending they should be subject to the same oversight as tour planes and helicopters.

“The potential for a high number of fatalities in a single air tour balloon accident is of particular concern if air tour balloon operators continue to conduct operations under less stringent regulations and oversight,” it said.
Governor Greg Abbott asked in a statement that “all of Texas to join us in praying for those lost”.

Two motorbikes crashed with trailer in Tumu, one dead