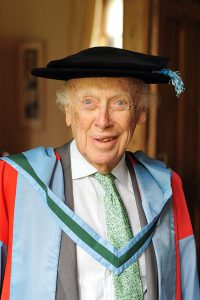 That I am inferior to you is a fallacy, and for the fact that your DNA studies have revealed to you that Blacks everywhere in the world are inferior in wisdom and intelligence to a ?brainless? scientist like you makes you a rotten watermelon ? looks good outside but the inside is worse than the content of a well decorated tomb.

That you think you can frustrate Obama in America and go scot free does not mean you will extend it to Togbe Agbeli. Beware and be warned.

James Watson, you are a disgrace to Apostle James, the great unifier in the early days of Christianity; change your name. Secondly, remember you are not Watts, but a son of Watt missing a Talent; shame on you.

I?ve forgiven you and have petitioned God above and his servants with an Eden soil to forgive you as well. But this is the consequence of your false research findings: in exactly seven years from this day of publication, your entire life and possessions shall utterly be erased from the surface of the earth.

You are not a king, so you have no kingdom. You know nothing about dominion because you are a slave, and remember you cannot build an empire. That?s why I never talked about your kingdom, dominion, or empire.

The sun of Africa burn your skin to the core of your soul for saying this about Africans. ?I was inherently gloomy about the prospect of Africa because all our social policies are based on the fact that their intelligence is the same as ours ? whereas all the testing says not really?. You also said ?people liked to think all human beings should be equal but people who have to deal with black employees find this not true?.

What kind of scientist are you? The one trained to indoctrinate or manipulate mentally? I pity your soul and I mourn over your family. Did your study really revealed this to you or you concocted it yourself? See this uncultured soul leading his family into hell fire? You?ve opened the door of destruction to visit your folks ? be ready to pay the price.

You can insult and maltreat BLACKFOLKS in the west and senseless judges would rule in your favour. You can develop biological weapons of mass destruction such as HIV and Ebola to erase the black race. You can lie on BLACKFOLKS and inject their women with infertility drugs claiming you are vaccinating them against HPV. James Watson and Co., you can do your worse to a man with a tanned skin, but go and ask one of our own in Asamando, King Pharaoh of the then Egypt if it is safe to dehumanize people made in the image and likeness of God, unless you belong to that brainless cult that says there is no God. Even that nature will punish you for what you have about Togbe Agbeli and his descendants.

Be ready to ?smell pepper? for coming after us. Continue to kill our folks in the U.S. and do whatever you want; posterity is waiting to judge. Aah!!! see an antelope stepping on the tiger?s tail with much impunity: wahala don?t catch am finish.

Let me sing my song to appease my soul, ?If you live in a glass house, don?t throw stone, and if you can?t take blow hmm hmm hmm ??

Read the words carefully, seven years from today, whether you will be alive to meet it or not, your memory will be erased from the earth. Hey, it has started; auctioning your Noble Prize to make some coin? Who is wiser here? It?s our heritage as Blacks never to sell an INHERITANCE or a PRIZE ? the wise is displaying humongous tendencies of a fool; oh!!!

For many who do not know who James Watson is, he is 1962 joint Nobel Prize winner in Physiology or Medicine with Francis Harry Compton Crick and Maurice Hugh Frederick Wilkins ?for their discoveries concerning the molecular structure of nucleic acids and its significance for information transfer in living material?, a citation on the Noble Prize website states.

Get ready for part 2.

Gen. James Mattis Gets Picked By Trump As US Defence Secretary