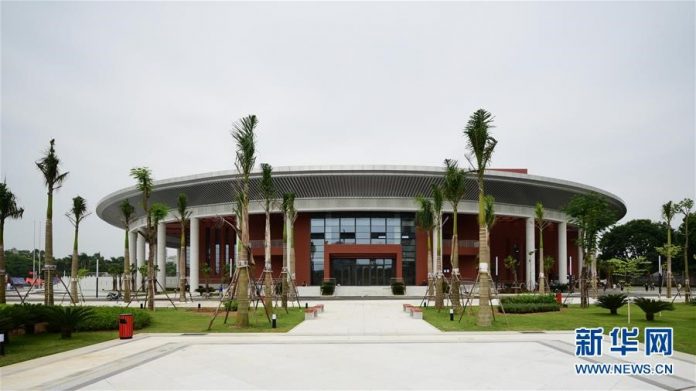 The inauguration and handover ceremony of the Vietnam-China Friendship Palace was held on Sunday in the Vietnamese capital of Hanoi.

The palace symbolizes the friendship between Vietnam and China in the new era.

The Vietnamese employee of the project, who has been in and out of the palace several times, said she was deeply impressed by the magnificent construction and unique design of the building.

“Every time I came here, I became more deeply drawn to its design and appearance. I think the palace is perfect,” she said.

Zhang Xiaobo, a designer at China Railway Design Corporation (CRDC), which designed the palace, said the layout of the palace looks like a cross.

Zhang disclosed that the middle part will be used as the main hall that can hold 1,500 people, and the two sides will house offices, a tea room, a Chinese medicine therapy room, a library and other sites for China-Vietnam cultural exchanges.

The palace will serve as a modern center for large-scale cultural activities in the future, Zhang added.

The Vietnam-China Friendship Palace, located in Hanoi’s development zone, was built with non-refundable aid from the Chinese government. The 28.6 meter-high palace is constructed on a 3.3-hectare site and occupies an area of 13,800 square meters. Nearly 60 percent of the site is built with roads and green plants.

Jiao Yunchuan, in charge of the technique group, said local temperatures, which could reach as high as 40 degrees Celsius, has made outdoor construction more difficult, especially since May when the project entered the final stage.

However, the heat didn’t intimidate the engineers and workers, and instead, they worked day and night to guarantee the timely completion of the project that embodies deep friendship and the selfless assistance of the Chinese constructors, Jiao added.

The project was classified to have the highest quality in its completion acceptance on Oct. 28 by experts from the China International Engineering Consulting Corporation, the largest multi-disciplinary engineering consulting organization in China.

“The high-quality construction makes us feel very safe,” said Don Tuan Phong, acting president of The Vietnam Union of Friendship Organization. “People of the two countries have maintained profound friendship and the completion of the palace will undoubtedly push the relationship to a new high,” Don was full of confidence.

The palace is the product of the efforts and growing friendship of builders of the two countries. They would celebrate every festival together, and a lot of Vietnamese workers shared homemade food with their Chinese counterparts.

The construction has also served as a matchmaker, during which a civil engineer named Li Fangyin fell in love and married a Vietnamese girl. In October, the wife gave birth. “It is the Vietnam-China Friendship Palace that brings our happy family of three together,” Li said joyfully.

The Chinese contractors were highly appreciated by the Vietnamese side for actively implementing a localized, green, and environmental friendly concept in the building of the palace.

Yang Jun, deputy general manager of a construction and investment company in Yunnan, southwest China, said the project has created about 1,000 job vacancies for local Vietnamese, whose salaries on average were higher than the local standard.