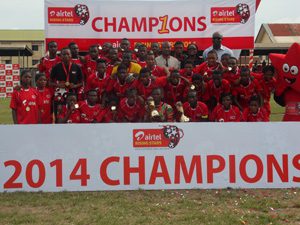 The boys? and girls? champions pose with Airtel and GFA officials.

Technical handlers of the 4th Airtel Rising Stars (ARS) have selected 19 boys and girls to participate in this year?s Gabon ARS Regional tournament. This was after a two?day soccer fiesta in the national finals at the Sunyani Coronation Park.

The players, whose individual brilliance attracted the attention of seasoned coaches such as Ibrahim Sunday, Francis Oti Akenteng and EK Afranie, will represent Ghana as brand ambassadors in this year?s tournament slated for August.

Zone 4, which was made up of the Ashanti and Brong Ahafo Regions, handed their Zone 2 counterparts (Northern, Upper East/West) a 2?0 defeat to lift the ultimate prize. Evans Osei and Prince Agyeman scored to crown their efforts in last Sunday?s soccer event.

In the ladies event, Zone 1 (which comprised Volta, Eastern and Greater Accra Regions) piped Zone 3 (made up of the Central and Western Regions) 1?0 in the final. The only goal of the match was scored by Ranti Maune.

Grace Asantewaa was adjudged the best female footballer. Teams and players who distinguished themselves received trophies, medals and souvenirs from Airtel.

The Managing Director of Airtel, Lucy Quist, expressed great satisfaction at the level of performance. She described it as an excellent showpiece. ?The competition has lived up to expectation. This goes to show our quest to support the power of potential in the youth. We are urging you on to go out there and demonstrate brilliance for your opponents to know the stuff you are made of,? she said.

Ghana Football Association(GFA) Emergency Committee member and Chairman of Juvenile Football, George Afriyie, who stood?in for Kwesi Nyantakyi, who left midway during the event, said; ?Our presence here is a clear demonstration of our commitment to grass?roots football. We will urge all to patronize Airtel products so that they can get more money to support juvenile football.?

Meanwhile, a second batch of 18 players has been selected to represent the country in an invitational tournament in Korea next month.

From: The Sports Desk