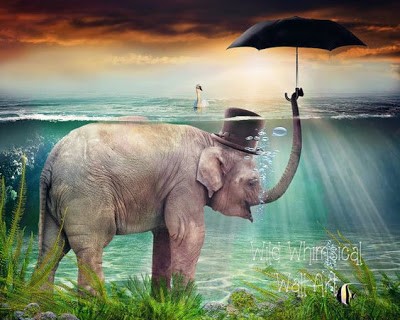 If my intellect serves me right, then I would authoritatively profess that; elephants are generally known to be the largest land-living animals. Ranging all the way from kindergarten to the highest level of education (if there may be) is a well-established fact that elephants are indeed large, huge, great, big or better still jumbo. Elephants are very strong and dangerous, and at their provocation can bring down logs of trees with their trunks. On the contrary, Umbrellas are only instruments for saving oneself from excessive sun scorch and rain. For the purposes of this write-up, I would discuss the features, uses and benefits of elephants as compared to an Umbrella. To begin with, Sea World Parks & Entertainment; an online animal guide portal describes the African Elephant as follows: “African elephants are the largest of all farm animals, adult males weighing between 1,800 and 6,300kg (2 and 7 tons/4,000 and 14,000 1b.). Females are smaller, weighing between 2,700 and 3,600kg (3 and 4 tons/6,000 and 8,000 1b.). Shoulder ranges between three and four m (9.8 and 13.1 1ft.)”. This to a large extent shows how large these creatures are, and for that matter their strength. Elephants are so strong that, they can pull down trees with their trunks. A leading wildlife journal, Elephant Forever reports that; because of the elephant’s incredible capacity for knowledge, understanding, learning and insight, they have proved to be most useful to human beings. It has been supposed that India was the first place in which elephants started to become trained for domestic purposes. Elephants were trained and used in Warfare by the Indians, Chinese, and Persians. They were used to scare off their opponents who rode horses. Elephants are also of industrial importance such as slogging and lifting of heavy loads. Moreso, elephants serve as a source of income through tourist attraction. Their ivories were one of the most sought after commodities in the late fifteenth century to mention but a few.

An umbrella or parasol on the other hand, is a folding canopy supported by wooden or metal ribs, which is usually mounted on a wooden, metal, or plastic pole. It is designed to protect a person against rain or sunlight. The word “umbrella” typically refers to a device used for protection from rain. The word parasol usually refers to an item designed to protect from the sun. Often the difference is the material used for the canopy; some parasols are not waterproof. Umbrella canopies may be made of fabric or flexible plastic. This definition is drawn from Wikipedia. The umbrella serves as shield, guard or defence to natural intruders like the sun and rain. It is also used for beautification and as an epitome of artistry. Its mass production for exportation results in national income.

The earliest record of elephants in the history of man was in Europe in 327BC where Alexander the Great descended into India from Kush. He was quick to adopt the use of elephants. After his death, his Ptolemy associate issued coins showing Alexander on elephant as head address, and that became an emblem of the Hellenized East. In comparison, the oldest reference to a collapsible umbrella dates to the year 21 AD, when Wang Mang (r. 9–23) had one designed for a ceremonial four-wheeled carriage.

The early times of these two symbols can be said to be belonging to the aristocratic class. This brings about competition among these two elements of society. This begs the question; which of these symbolic factors can dominate over the other?

Boiling it down to our locality; what can you make of these two elements in Ghanaian politics?

Your wonderful comments would help settle issues this piece aims to raise.