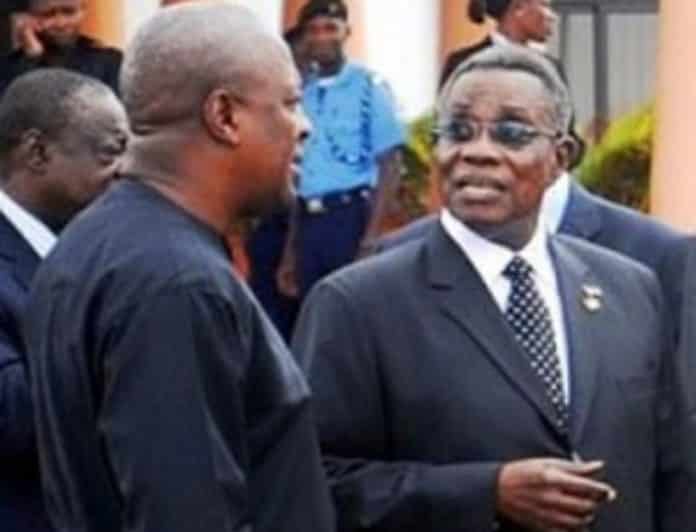 I am writing this piece with the full and logical understanding and precedent from the pardoning of the Montie Three Gang by the subject of this column, that I, too, will be immediately pardoned, because I am writing this forensically sustainable accusation with profound remorse. And after I have been promptly pardoned by Little Dramani, upon the well-rehearsed advice of the noble members of our august Council-of-State, any Ghanaian citizen or even foreign-born Ghanaian-resident Mahama shill like Mr. Dele Momodu, of course, who virulently disagrees with the Gonja (Did I hear somebody say “Ganger”) Boy has every right to petition the Wood Supreme Court for redress.

I am writing and making this necessary accusation on the strength of evidence provided by Mr. Bernard Allotey-Jacobs, the morbidly cantankerous hip-shooting Chairman of the Central Regional Chapter of the ruling National Democratic Congress (NDC) – (See “Mahama Oblivious of Cause of Mills’ Death – Allotey-Jacobs” Starrfmonline.com / Ghanaweb.com 8/15/16). The very first evidence entails the apparent bad blood that existed between the strategically slain President John Evans Atta-Mills and his arch-lieutenant, to wit, then-Vice-President John Dramani Mahama.

According to Mr. Allotey-Jacobs, only four people in the country, presumably all of them members of the ruling National Democratic Congress, were privy to the fast-deteriorating health condition of the first democratically elected Ghanaian leader to die in office. Mr. Allotey-Jacobs names himself among the four confidants of the late President Mills; the other three are Dr. Cadman Atta-Mills, the twin-brother of the deceased; Mr. Sammy Atta-Mills, whom Mr. Allotey-Jacobs also claims to be a sibling of the late president; and a longtime presidential bodyguard by the name of ASP Adadei, who I presume to have been a senior officer of the Ghana Police Service (GPS) at the time of President Mills’ death.

The second circumstantial and forensically sustainable evidence presented us is the fact that Mr. Allotey-Jacobs has waited for nearly four years to come public with his purportedly confidential knowledge of the “real cause” of President Mills’ death, in answer to well-meaning Ghanaians who have been demanding answers for nearly as long as Mr. Allotey-Jacobs claims to have kept this knowledge close to his vest, as it were.

Thirdly, if the Central Region’s NDC Chairman’s claim has validity, then it clearly appears that Mr. Koku Anyidoho, the extant Communications Director of the Mills presidency, has been lying to us on the strength of his hallucinations, something I have made a legion of references to, for nearly as long as my good, old Uncle Tarkwa-Atta has been on the other side of our present human reality. Mr. Anyidoho may very well be strung up on hallucinogenic drugs; and the sooner he consulted a shrink, the better it would stand to both his own family’s good as well as the protective good of Ghanaian society.

But even more significant must be underscored the fact that Dr. Cadman Mills has contradicted himself several times vis-à-vis the real cause of the death of his elder twin-brother. One strand of the distinguished economist’s account has President Mills dying of natural causes, while the other account is thematically undergirded by foul play. To the foregoing must also be added the fact that the former University of Ghana’s tax-law professor’s own son, Mr. Atta-Mills, Jr., has also gone through several phases of contradictions regarding the real cause of his father’s death, one that is strikingly similar to that of his Uncle Cadman’s.
It is also quite fascinating that Mr. Allotey-Jacobs has yet to tell the nation precisely what caused the death of his former boss. Then, of course, we have yet to hear or learn anything from ASP Adadei. Needless to say, the posters querying the cause of the death of President Mills, reportedly sighted in several Cape Coast neighborhoods, among them Pedu Junction, Abura, Adisadel, Moree Barrier, Aggrey Memorial Senior High School, the Cape Coast-Takoradi Highway and the vicinity of the new Cape Coast Stadium, where President Mahama recently launched his 2016 presidential reelection campaign, have great significance and relevance because the man who ought to have officially announced both the death and the cause of death of his immediate boss has yet to tell the nation anything meaningful, short of his strikingly “MacBethian” celebration of the purportedly auspicious decision by a sagacious Divine Providence to shove the man whose invitation for the Gonja Boy to play his second-bananas or “political spare-tire/tyre,” Mr. Mahama had reluctantly accepted, out of the way by making the latter the first Ghanaian president to have been born post-1957.

And then, lastly, Mr. Allotey-Jacobs uses the curious adjective of “oblivious” to confirm what many of us have suspected for quite some time now, that there was a palpable element of bad blood between Messrs. Mills and Mahama, and one that verged on mistrust. For instance, we are told that at the time of his death, President Mills had established a commission of enquiry to look into some shady financial dealings involving then-Vice-President Mahama and the Ghanaian taxpayer’s money.

Well, as I categorically stated at the beginning of this article, I expect to be offered unconditional presidential pardon by Little Dramani, because the primary objective here is the truth, which ought not to be made a casualty of the vaulting and dictatorial ambitions of any political opportunist. And, by the way, the word “oblivious” has an unmistakable element of “carelessness” and “callousness” to it. By all means, Mahama must be given the boot!

The fact of the matter in Nigeria…

Western-North newest region to be affected by bird flu

Over 400 US Troops Departed Kabul Ahead of Withdrawal Deadline

US Defense Contractor Charges US$6,500 for Flights Out of Kabul