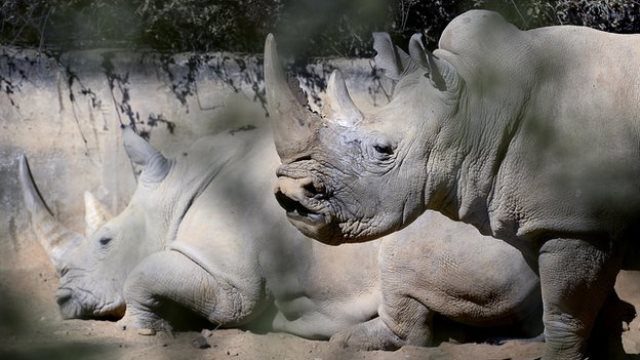 In central Kenya’s Ol Pejeta Conservancy, Sudan lies quietly in his pen, alone and lonely. Outside, there is a team of armed rangers who take turns guarding the mammal day and night.

Sudan is the last male of five remaining known northern white rhinos in the world.

As its name suggests, the rare species was first captured in 1980s in Sudan, which, together with DR Congo and Central African Republic, used to be their natural habitat. However, years of poaching for rhino horns as well as conflicts in the region have resulted in the animal’s disappearance from the wild almost a decade ago.

Sudan had then been kept at a zoo in Czech Republic before brought to the Kenyan conservancy in 2009 with another male, Suni, and two females, in a hope that the natural conditions here can provide “the last chance of survival” and help them breed.

Unfortunately, Suni died last October, which was followed by the death of another male in a U.S. Zoo in December, bringing down the number of remaining northern white rhinos on the planet from seven to five: Sudan and two females in Ol Pejeta, and another two females living separately in zoos of the United States and Czech Republic.

At 42, Sudan is too old to mate as the mammal usually has a life expectancy of 40 years in wild, and maybe a little longer in captivity. The rest four females are also barely to reproduce either because of old age or other physical reasons.

“It’s highly unlikely that the animal will not go extinct,” said Richard Vigne, Ol Pejeta’s chief executive. “If a species diminishes to such small number, then it becomes very difficult to recover that species.”

Vigne said there were several natural breeding attempts when the animals were first brought to the conservancy, but all failed.

“The animals haven’t lived in a natural environment for a long time, and they are getting old and inter-related,” said Vigne, adding that if the rhinos haven’t bred for a long time, it would not be easy for them to start again as their reproductive organs may start to degenerate.

Mohammed Doyo, the keeper of the rare species, also recalled he saw Sudan try to mate three years ago with a female southern white rhino, yet it eventually turned out futile.

Like the northern white rhino, a southern white one is a subspecies closely related to the northern, but is less endangered. It has an estimated population of 20,000 worldwide, mostly in South Africa.

Both subspecies has wide month though the northern has hair along the edge of its ears. Moreover, the northern tends to be slightly less social than the southern, and prefers thicker bush while the southern likes to be in open space.

In this 90,000 acre of conservancy, instead of wandering around on the vast savanna as before, Sudan now has been kept in enclosure for a year to avoid hurt from other rhinos, according to Doyo. Though guarded by armed rangers around the clock, the mammal’s horns had also been trimmed for fear of poaching.

“He is like my own children. I would feel very sad if we lose it,” said Doyo.

“Sudan could die tomorrow,” said Vigne, noting that the last hope to save the rare species from complete distinction would be artificial reproduction methods.

“We need to raise money first, and we estimate it would take as long as two years before we can get a successful pregnancy with a pure northern rhino embryo,” he said.

“It is not perfect, but it is better than nothing,” Vigne lamented, calling on more efforts to save the rare rhino and other endangered wildlife.

“Poaching of rhinos across Africa still continues at a very high rate. If we as human race don’t do something to stop it, what is happening now to the northern white rhino will happen to many other species,” he said.