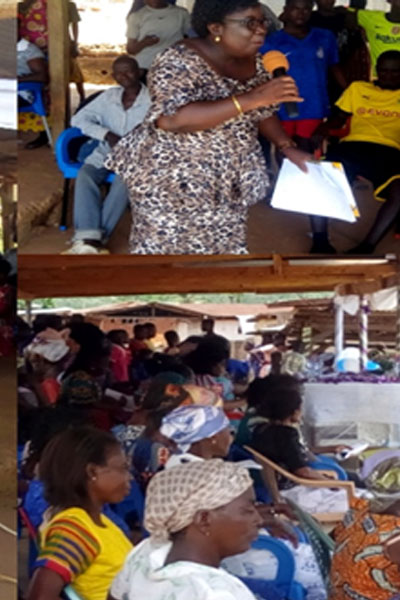 The Hunger Project Ghana (THP-G), an organization working to empower communities to sustainably end hunger in Ghana, has held a durbar at Dwerebease in the Kwahu East District to celebrate women for their immense contribution to national development.

The durbar, which was in commemoration of the International Women’s Day, was attended mostly by women and girls drawn from basic schools in the community.

“Each for Equal”, was the theme chosen for the event.

Mr. Solomon Amoakwa, the Zonal Project Officer for Nkawkaw, on behalf of the Country Director, Mr. Samuel Afrane, said it was important for people to desist from practices that hindered the progress of women.

He said women had the potential to make positive contributions to national development at all levels of the governance structure when given a level playing field and the needed support of relevant stakeholders.

Mr. Amoakwa said women were critical partners whose role in every endeavor was virtually indispensable and stressed the need to support them to overcome the numerous obstacles militating against their development.

He said THP-G as part of its commitment to empower women was gender sensitive in the implementation of all its projects, saying that, women formed the nucleus of activities of various epicenters across the country.

He entreated women to believe in themselves and take up leadership responsibilities to prove their worth and also serve as role models for young women.

Mrs. Cynthia Anim, Headmistress of Nkwatia Senior High School, said despite the women empowerment campaigns over the years, women still had a long way to go to bridge the gap between them and their male counterparts.

She said there was so much imbalance and inequality in terms of opportunities for women to develop and called for a deliberate effort to address the anomaly to lift women from the doldrums.

She underlined the need for parents to refrain from practicing gender inequality among their children when allocating domestic chores to them, saying that, the girl child was often disadvantaged even in the home.

This, she noted, must not be encouraged in order not to suppress the potentials of girls to rise to high positions in society.

Mrs. Vida Afua Afful, the District Director of Health Services, said the days when women were relegated to the background were gone as more women occupied high level positions in all fields by dint of hard work.

She challenged young girls to pursue courses in science and technology and reject the defeatist mentality that those courses were the preserve for boys.

All Nations University is 20 years