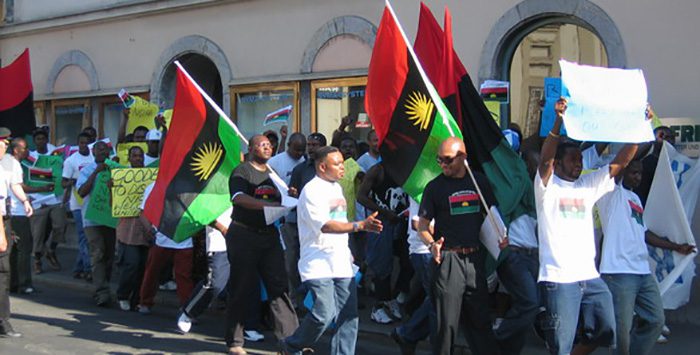 In 1982 when the late Ikemba Nnewi, Dim Chukwuemeka Odumegwu Ojukwu returned to Nigeria from exile, many of his contemporaries had expected him to join the Nigerian Peoples Party (NPP) widely seen as Igbo party because it was led by the late Owele of Onitsha, Dr. Nnamdi Azikiwe, but to their greatest suprise, the late Ikemba joined the National Party of Nigeria (NPN) which was Nigeria’s ruling party in the second republic.

Reporters who were curious went to Ikemba and asked him why he did not join the NPP seen as Igbo party, Ojukwu told them that he joined the NPN because he wanted to bring the Igbo race back to national politics so that they would be part of the mainstream politics where decisions that affects the entire nation are taken.

After the 1983 governorship race in the old Anambra State, the governorship candidate of NPN, Chief Chukwuma Onoh won the election thereby denying the candidate of the NPP, Chief Jim Nwobodo who was loyal to Dr. Azikiwe re-election.

Ever since then, the Igbo race have always identified with national politics until the 2015 general elections.

Because of the bitter experience he had when he was an opposition governor of the old Anambra State in 1979 especially how beneficial projects that would have boosted the socio-economic and political wellbeing of the southeast region were taken away from him simply because he was an opposition governor, Chief Jim Nwobodo wanting to prevent the repeat of what transpired during the second republic hurriedly moved large chunk of southeast leaders to the ruling All Progressive Congress, (APC).

Before I delve in to the current political gymnastics in Anambra State and the entire southeast region, I want to state that Ndi-Igbo have never played opposition politics before. Apart from the fact that their political disposition is one that makes things happen which was responsible for why they have been in national politics right from 1960, the Igbos does not have the ingredients needed to play opposition politics in Nigeria.

They are not in control of the media which is very indispensable for vibrant opposition. They are rich but does not have the type of slush fund required for vibrant opposition politics. The monthly federal allocation of the entire states in the southeast region is not up to what Lagos State earns monthly as Internally Generated Revenue (IGR).

When the APC was in opposition, it took Lagos State and some high net worth individuals to keep the party afloat and vibrant until it was able to win the 2015 Presidential race. But, no southeast state can do that for PDP or APGA because some of them are still having issues with the payment of workers salary. So, the only way for Igbos to regain their lost identity in national politics is by embracing the ruling All Progressives Congress so as to be part of the mainstream decision making process in the country.

Hence, with about two weeks to the November 18 governorship race in Anambra State, Nigerians and friends of Ndi-Igbo are watching with keen interest to see which direction the region would go because Anambra State is the mirror of the entire southeast region and it will tell the world what to expect from the zone in 2019.

The outcome of the Anambra election will also prove to national strategists as to whether the southeast region is ready to play politics of reason or they are still interested in the politics of sentiments they played in 2015.

We have seen from events across the globe that sentiment is not a strategy. Sentiment is myopic, it is suicidal and it does not help or influence anything positive.

The fact of the matter is that, the southeast region made some terrible mistakes in 2015 because they allowed many unreasonable factors to sway their main interests which Anambra race presents an opportunity to correct.

As usual, some of the terrible leaders who led the region to the worst political tsunami in 2015 are at it again trying to use the Anambra race to drive the region in to Hurricane Katrina just because they want to advance their selfish political and financial interest without giving a hoot to what becomes of the Southeast region after the polls.

Already, they are many candidates jostling for Anambra Government House, but the race as it is today is a tripartite race between the All Progressives Congress (APC), Peoples Democratic Party (PDP) and the All Progressives Grand Alliance (APGA). APGA is only constricted to Anambra State without any hope of expansion now or in the future. PDP is a party rejected by Nigerians in 2015 for so many reasons.

One had thought the PDP had learnt some bitter lessons on what made it to lose the 2015 rounds of election both at the centre and in some states. But its August primary election for Anambra State shows the party learnt no lesson.

One of the reasons that made Nigerians to sack PDP from power in the said year was because it imposed unqualified candidates on party members against popular wishes. The same feat was repeated in Anambra PDP primary this year. Instead of using authentic delegates list for the conduct of the Primary, doctored delegates lists were used in conducting the shambolic primary.

How can we explain a situation whereby people who were not members of the PDP as of January this year were brought in to be party flag bearers? The PDP constitution clearly stated that before any defector is allowed to run for any elective post in the party, such person must have stayed in the party for at least two good years, instead of allowing the law to run on its full course, the law was breached to allow somebody who as of January this year was not a PDP member to fly its flag.

The PDP Constitution also stated that the only condition that will allow a defector to fly its flag is when the National Executive Committee (NEC) of the party grants waiver to such a defector, but the party NEC meeting was not held as at the time the primary was conducted let alone granting the party’s waiver to anybody, yet a defector was allowed to fly its flag. Does that show any sign of remorse on the side of a party that woefully lost the 2015 elections on the account of impunity? Or how can a party that does not respect its own constitution respect the entire constitution of Nigeria?

The APC has a very young, dynamic and vibrant candidate which also reflects the yearnings and aspirations of the people of the zone. Tony Nwoye is also a good and sellable candidate which has already put the party at a very advantageous position ahead of the polls.

Apart from using the November 18 governorship election in Anambra State to gauge which direction the southeast region would go in 2019, it will also prove the sincerity and commitment of the people of the zone to their clamour for the inclusion of youths in governance.

Whichever angle anybody views it from, the fact remains that the southeast region needs a comeback to national politics and the November 18 polls will show the political direction of the zone.

Therefore, if I am to chose among the tripartite candidates, I would rather go for Comrade Tony Nwoye because of the greater stake the Igbos have to protect in project Nigeria.