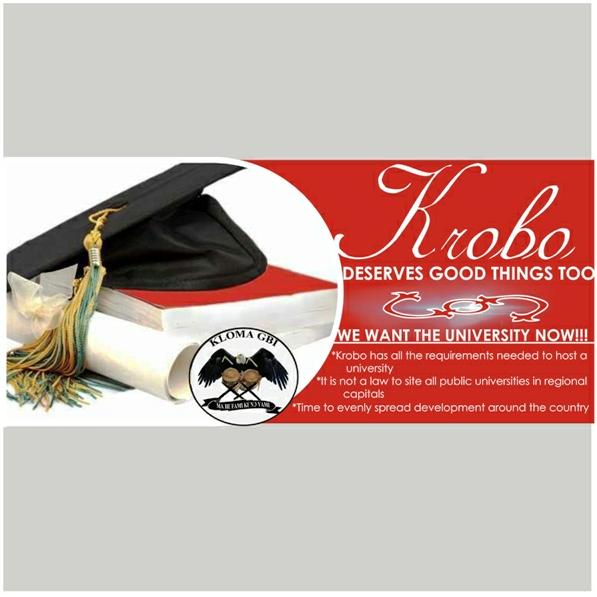 There is a debate in Parliament now which should be of great interest to every well-meaning persons of Krobo descent. Listening to the substance of the argument being advanced by the Minority side in Parliament makes me cringe in my seat. I still find it difficult why the minority, led by Hon Dominic Nitiwul, Deputy Minority Leader would want to make such a grievous error.
Based on the findings/recommendations from a committee of experts, government decided to situate the proposed Eastern Region University (the University of Environment and Sustainable Development) at Somanya in the YiloKrobo Municipality and has since been taking steps (at a snail pace, though) to make this happen. Government managed to move what initially sounded a mere rhetoric beyond the formation of a mere committee and drafted a bill to give legal backing to the establishment of the educational facility. The bill is presently before Parliament for legislative approval.
We woke up to a rather shocking news last Friday about how the minority in Parliament is determined to influence the relocation of the project from YiloKrobo toKoforidua in the New Juabeng Municipality, hinging its lame argument on the fact that Koforidua is more deservingof the project because of its status as the Eastern Regional capital and the fact that by precedent, all public universities have been sitedin the regional capitals and so this must follow suit. To the minority, the choice of Somanya as the site for the main campus and Donkorkrom in the Afram Plain North District for a satellite campus was based purely on political expediency for which reason the project must not see the light of day because the designated towns and their respective constituencies are ?freebies? (world bank) of the ruling NDC.
The Deputy Minority Leader is even on record to have literally sworn to rally all other members of his side to ?Suarez?the bill when it comes back for third reading. Given his position and the seriousness with which he made the statement, this cannot be taken as an empty ?threat?.
I am sad !As a Krobo, you will expect that I will oppose the minority?s argument with aggression, after all, who will watch a fleshy meat in his plate swapped with dry bones? That aside, isn?t it unfortunate and baffling that the minority (and Hon. Nitiwul in particular) is being similarly driven by political considerations to think that the choice of the Krobo area for the project is for political expediency which may inure to the benefit of the ruling NDC government, for which reason the project site must be changed at all cost without further consideration of how that will deprive the Krobo area of this very important facility?
Come to think of it, who said it is a rule or law enshrined in the constitution that all (emphasis on ALL) public universities should be located in regional capitals? Since when did Tarkwa turn a regional capital to qualify to host the University of Mine and Technology (UMaT)? I thought the University of Education is located in Winneba which is not a regional capital.
It would be expected that in the face of the growing congestion in the capitals (with its attendant negative ripples as being experienced), arising out of the overconcentration of such important facilities in the cities, policy makers such as our MPs and key decision making bodies like Parliament will adopt more proactive measures to start diverting the increasing traffic to the cities and reduce the alarming rural-urban drift through a conscious, logical and strategic spread of developmental projects such as this. Must we all desert our communities/towns and flock to the unplanned,garbage-filled, flood-prone and overpopulated cities and come put up in makeshift structures (because decent accommodation is just unaffordable) to access higher education and ?improved living condition??
Is it not time for us to rethink our approach to development and take a cue from what Accra, for instance, has become to want to start giving a more practical meaning to the concept of decentralization? Won?t we rework this elementary method of doing things and prove ourselves contemporary by cleverly and evenly distributing developmental projects across the country? Or is this an indirect vote of no confidence in the technical committee of experts on whose findings and recommendations the Krobo area was chosen?
If the KoforiduaPolytechnic will eventually be upgraded into a full-fledge university as is the proposal and promise by this government, is it the best of options to take this new university project to the same Koforidua (where another private university is in full operation) when other and more areas are weeping for just, I mean just, a senior secondary school worth its name?(http://www.ghananewsagency.org/education/koforidua-polytechnic-to-become-university-in-2016-90445),
If the argument by the minority is informed by more legitimate concerns which are yet to come to the fore, they are better raised now for proper assessment and analysis otherwise these ones are loose and could easily be misinterpreted as an anti-Krobo agenda which will further weaken the base of a party that is still striving to find an antidote to its poor showing inpolitical contests in the area.
Watching from my corner hereas a worried observer, I genuinely feel the minority?s argument is ungrounded and risks ditching the party further. Can someone be smart enough to read between the lines and find the brake pedal?
I have spoken my mind and not yours; let the discerning reader and well-meaning-Krobo make meaning of this piece

The writer is a journalist and a blogger (the kroboquill.blogspot.com) and can be reach via [email protected] or 0266 000 747. You can follow him on twitter with the handle @henkingklonobi

Dr. Bawumia Has Distinguished Himself As A Precious Asset for Ghana and NPP: Razak Kojo Opoku Writes