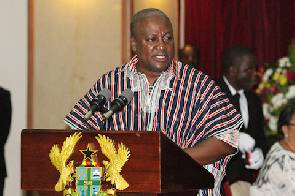 Monday, February 23, 2015, all the news media; both the print and electronic as well as almost all the social media in Ghana carried the banner headlines: HE John Dramani Mahama will, on Thursday, February 26, present the State of the Nation Address to the 275 Members of Parliament, all Ghanaians and the whole world as to how the governance of Corporate Ghana is concerned. Some of the headlines read thus; JDM for the Showdown on Thursday;